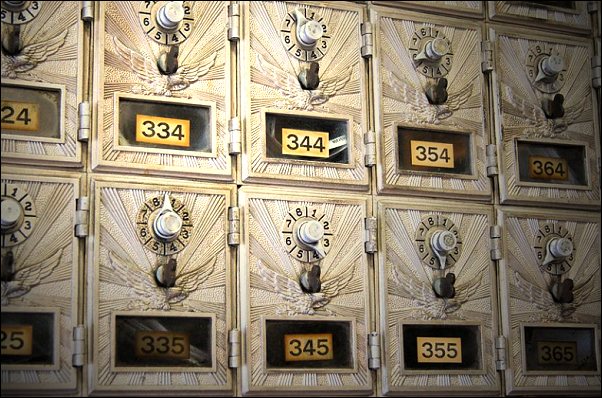 Gunther sat in the crowded, claustrophobic, smoke-filled auction house. He desperately wanted to win the bid for the post box; a box that had a legendary mysticism in his family. One of the units belonged to his grandfather and it was said to house his journals. It had been buried in rubble when the allies bombed Berlin. Now it sat illuminated through the cigarette scented fog; beckoning to Gunther. He had to have it.

The bidding war commenced and Gunther was victorious. He couldn’t wait to get it home and open the infamous box 354. The legend with his family was that his grandfather was a crusader for justice; that he tried to help the German people during the tyranny of the Third Reich. A proud legacy to have being a native Berliner.

Gunther struggled to pry open the box. After trying time and again there was an audible, “pop” when the box finally sprang open. Gunther looked inside. There were no journals in the compartment, but he could see something shiny hidden in the back. He turned it over and shook it; falling out was a death’s head Nazi hat. Aghast Gunther picked it up. He was confused why this hat would be in his grandfather’s possession. He figured that it belonged to one of the many SS officer’s that had met their fate courtesy of his grandfather. He turned it over and over in his hands examining it. Gunther placed the hat onto his head. Immediately he could feel the darkness of unconsciousness prying at his mind. Gunther closed his eyes and passed out.

When he woke he was already standing; he wasn’t sure how. He looked down and was shocked that his red tank top had been replaced with a black jacket. He ran his fingers down the ice-cold buttons and along the bottom of the coarse wool. His eyes trailed down to his legs and feet. He was dressed in black pants and boots that came up his calf. Gunther looked up and out at his surroundings. He stumbled backward when he discovered he was not in his living room any longer. He stood slack jawed and dumfounded until the stench of human waste and burning flesh reached Gunther’s nose; he wrinkled it. The nausea rose in Gunther and he had to get away. He placed his hand over his nose and mouth as he sprinted towards the nearest building.

As he entered the ramshackle structure he was greeted with a cacophony of “Heil Hitler”. Gunther lifted his head and removed his hand. He looked around the room and the doctors and nurses were saluting him with their right hand in the air. He looked around and was disgusted at what he saw. There were men, women and children in the beds; all in different stages of discomfort. He turned towards the mirror that was on the wall. He stumbled backwards when he saw the reflection looking back at him. Gunther was dressed in a commandant uniform. Medals and ribbons adorned the upper lapel, his officer insignias shone in the muted light of the hospital. His grandfather’s face as a young man looked back at him. Gunther looked around and saw a sign hanging on the wall that made him collapse. “Arbeit Macht Frei” (Work sets you free) and he knew that he was at Auschwitz. His grandfather’s legacy was a lie.