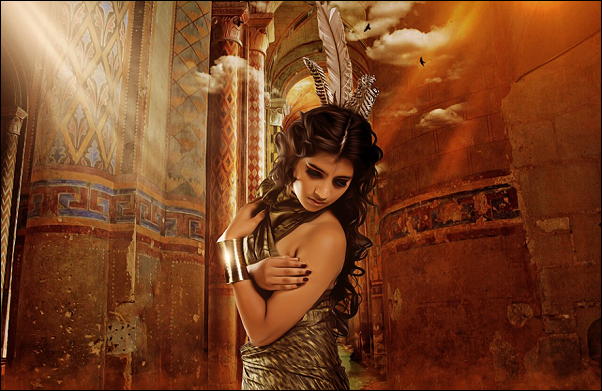 When she began the stories, she was only thinking of herself. Of surviving to draw breath another day. As daughter to the Vizier, she had been safe from the King’s bed, and could have spared herself the worry of whether she could stretch the curiosity of the man another day.

She had seen her friends and companions married and buried in quick succession and determined to stop the slaughter. So, she resolved to take their place in the man’s marriage bower to save the other girls of the kingdom.

On their wedding night, Scheherazade started the tradition, spinning a tale both fascinating and fanciful. The king was so mesmerized by her story he forgot his vow to stave off humiliation by putting his bride to death before she could betray him. Cunning Scheherazade feigned fatigue and ended her story in the middle of a scene, thus ensuring that he would not kill her until he had heard more.

For one thousand nights she continued thus, capturing his heart with her words, and protecting herself from death. The stories grew increasingly elaborate. Little did the king know where she got her inspiration, for she spent the days wrapped in the arms of another as they whispered together as the king governed his kingdom.

Finally, she could take no more of the ruse. She must end her subjugation at the hands of her husband. On the thousand and first night, she told a new story. One connected to no other.

Standing before the king, she wove a dance into her tale—a tale of forbidden love and stolen embraces. The king was shocked. This was the story of his first wife, and the reason for all the virgin brides…but the story was subtly different—and seemed to be her own.

“How could you betray me so?” he whispered brokenly, “while our children sleep in the next chamber?”

“How could I not when you have ruined so many lives for your own pleasure? It is true that I came to care for you as the father of my children and the master of my house, but my heart I could not give you after the pain that you have caused. That I gave freely in exchange to the merchant Ali Baba, and in return, he gave me this.” She plunged a silver dagger into his heart.

“This is the ending to my tales,” she murmured. “Ritual murder done to a tyrant who abused the women of his people. May the ravens feast upon your soul.”

Gathering her silken cloak around her, she stole into the night, and she was never seen or heard from again. This is the truth of Scheherazade’s last story. I have it from the best authority.

Poems exploring hell and damnation. Tales of sorrow, vengeance, betrayal, and redemption. Ghosts, ghouls, and demons stalk these pages. Don’t read in a lonely house…in a darkened room by a single candle…

…unless you like the touch of an icy finger up your spine.