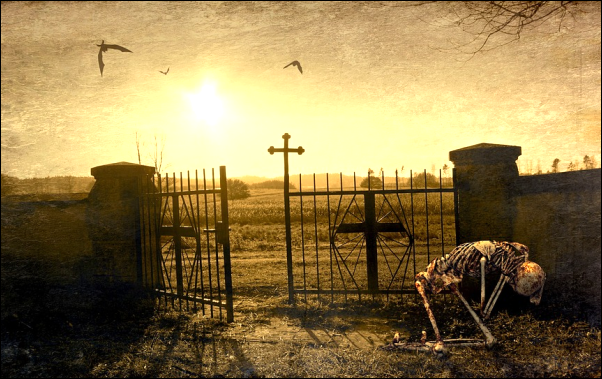 Goddamned bitch. Who did Amelia think she was that she could talk to Alan like that? He hadn’t heard her voice in years but he recognized it immediately. Sweet as honey with a sting like a wasp. He knew it couldn’t possibly be her since her husband shot her years ago. Whatever called to him from that graveyard wasn’t the sultry bitch he thought he knew so well.

The midday sun burned the desert ground. The heat scorched his skin. A granite wall surrounded the grave site. The wrought iron gate gaped open, beckoning him. Although crucifixes festooned the surface, anything holy had deserted this graveyard a long time ago. Alan stood, stupidly thinking he could pull a fast one on Amelia at long last.

“Hey, pencil dick. Afraid you can’t get it up? Why don’t you come over here and show me how it’s done?”

Alan walked past the gate. Amelia leaned on her gravestone, fondling her gigantic left tit. The bitch hadn’t aged a day since he last saw her seven years ago. Alan, on the other hand, has lost most of his hair and had gained a spare tire around his middle.

“You cast iron cunt,” he said, grabbing his shaft through his jeans. “You want this? I’ll give it to you.”

She gaped at him, pinching her nipple as she ground her sweet ass into the gravestone. He flashed upon their last tryst. She was hell on wheels in bed; wanting him to shove his fingers up her pussy until she cried out in climax. Now he watched as she spread her legs, the promise of a final fuck session playing out right before his eyes.

After taking a deep breath, Alan marched across the parched earth until he reached her. She took him in her arms, but he twisted her body about until she faced away from him. He then lifted her skirts and gave her the pounding she deserved.

Why was she laughing?

He finished and zipped up, leaving her sprawled on a heap on the desert floor. She snickered, barely holding back her mirth.

“What’s so funny?” he demanded.

She pointed to the gate.

A skeleton leaned against the granite wall; one Alan had not seen when he entered the graveyard. Unnerved yet curious, he walked to it. A medallion hung around its neck – Alan’s medallion. As his fate dawned upon him, Amelia’s lilting voice rose, her mocking laugh descending upon him one last time before she disappeared. Now trapped, Alan walked the graveyard alone. Amelia got the last laugh after all.

E. A. Black’s short story Can You See It? appears in the summer 2019 issue of The Horror Zine Magazine.

Nina D’Arcangela is a quirky horror writer who likes to spin soul rending snippets of despair. She reads anything from splatter matter to dark matter. She's an UrbEx adventurer who suffers from unquenchable wanderlust. She loves to photograph abandoned places, bits of decay and old graveyards. Nina is co-owner of Sirens Call Publications, co-founder of the horror writer's group 'Pen of the Damned', and if that isn't enough, put a check mark in the box next to owner and resident nut-job of Dark Angel Photography.
View all posts by Nina D'Arcangela →
This entry was posted in Authors, Dark Fiction, flash fiction, FREE, Horror, Ladies of Horror, Writing Project and tagged author, E.A. Black, fiction, flash fiction, Horror, Ladies of Horror, picture prompt, Writing Project. Bookmark the permalink.