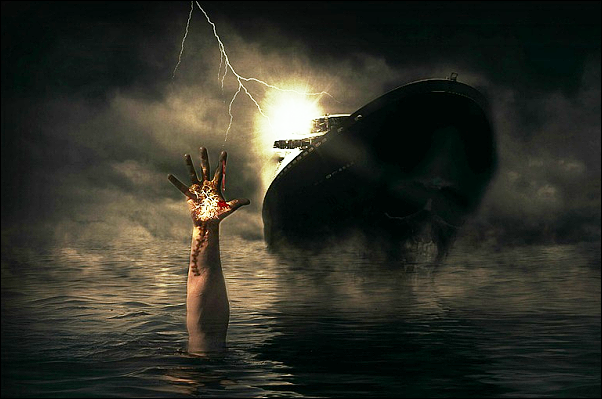 Lucy strode out of her ship office and onto the starboard deck. She realized she was over doing it with Halloween decorations for this cruise, but it was her favorite holiday and she had a lot of fun with the passengers. They always seemed to enjoy her enthusiasm in making the boat festive and arranging the pumpkin carving, monster cupcake competition, and annual Ghost Ship Bash. Hundreds of passengers signed-up particularly for this cruise each year.

She had just needed to make sure everything was set-up correctly before she headed to her cabin for a light snack and to get ready for the evening’s festivities. She spotted a man out of her peripheral. She glanced over by the rail to see who it was—but the man, clothes half-torn and wet, was flickering in and out of her sight. She paused, perplexed, and looked away. When she looked again, there was no one there. Biting her bottom lip, she picked up her coffee she had sat on the edge of the deck and ran off for a refill. She must be over-working herself and in need of more caffeine.

Back in her cabin, she thought to herself about what she had seen. Images played through her mind of crashing waves, screams for help, arms reaching up through the water. Her mind was always causing her distractions especially on this ship, but the visions were coming stronger these days. She put on her nautical queen outfit, and a blue wig over her brown hair wrapped in a low bun, and adjusted it. She needed to push these horrific images from her mind and concentrate on the party.

Lucy was short and petite, and she slipped through the crowd easily making sure everything was on point at the party. Vampires and pirates and Harley Quinn’s danced to the techno music under the disco ball while rum punch sloshed across the floor. Lucy made her way to the punch bowl herself. She needed to take off the edge a little from the stress of putting on the party, but mostly to drown the images of people dying in the ocean that kept seeping into her head. She stood by the bowl with her cup watching the party goers and with her other hand rubbed her forehead. She looked to the right and saw the flickering man again. This time he stared directly at her and made a motion with his hand for her to follow him. Then, he walked out the door to the deck.

Against her better judgement, Lucy wound her way over the door out of sheer curiosity, or stupidity, but she never was one to not take a risk. She pushed the door open and felt the wind off the sea hit her face. The waves were getting rough from an incoming storm. She looked left and right down the wrap-around deck for the man, but saw no one. She heard the screams again and covered her ears, seeing lightening suddenly crack and illuminate the sky in front of her. Mist splashed up onto her feet.

She went to the railing and leaned over slightly to peer down below to the bottom deck. Before she could right her head, she felt a hand on her back, swiftly pushing her. As she turned, she saw the man, his large arm covered in wounds and strange stitching and blood, the arm that caused her to tumble sideways over the railing, but he was just staring straight ahead.

Opening her mouth as she fell to the water, giving a silent scream that just couldn’t allow itself any decibel in warning to anyone. The water below was full of arms, protruding hands from the waves, mouths that screamed out their pain even if she couldn’t. Her blue wig flew off and her arms frantically tried to catch wind, but then she closed her eyes and started to hum a favorite tune. She drowned out the noise herself before the water’s curse drowned her out for good. 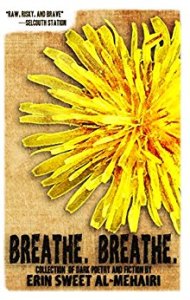 It’s the one-year anniversary of the publishing of my debut dark poetry and short story collection, Breathe. Breathe. Much of it tells my life’s pains and haunts and fears poured, sometimes savagely, onto the page. However, there is also legend, folklore, and fantasy as well.

Nina D’Arcangela is a quirky horror writer who likes to spin soul rending snippets of despair. She reads anything from splatter matter to dark matter. She's an UrbEx adventurer who suffers from unquenchable wanderlust. She loves to photograph abandoned places, bits of decay and old grave yards. Nina is a co-owner of Sirens Call Publications, a co-founder of the horror writer's group 'Pen of the Damned', founder and administrator of the Ladies of Horror Picture-prompt Monthly Writing Challenge, and if that isn't enough, put a check mark in the box next to owner and resident nut-job of Dark Angel Photography.
View all posts by Nina D'Arcangela →
This entry was posted in Authors, Dark Fiction, flash fiction, FREE, Horror, Ladies of Horror, Writing Project and tagged author, E.A. Black, fiction, flash fiction, Horror, Ladies of Horror, picture prompt, Writing Project. Bookmark the permalink.