‘The Venus Club’ and ‘Song of The Moth’, by Katie M. John 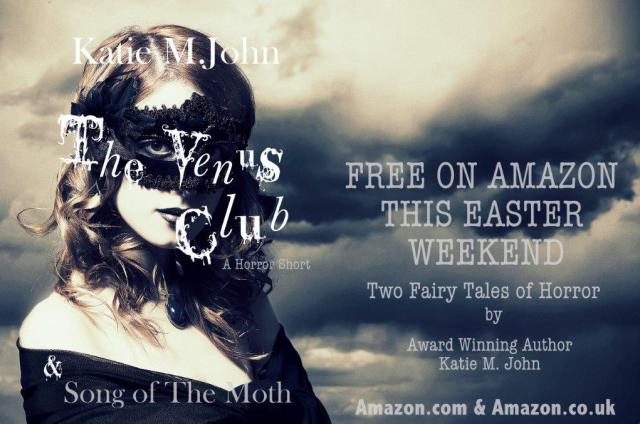 ‘The Venus Club’ and ‘Song of The Moth’ (2 Fairy Tales of horror) are available FREE on Amazon over the Easter weekend FRIDAY – MONDAY
Amazon.com       Amazon.co.uk

Winner of the indie horror spring 2011 award, ‘The Venus Club’ is a dark little tale about revenge. When Eleanor flees the horrors of her upbringing in a violent and brutal abattoir based in the London The Rookeries, she is saved by a mysterious woman, Kate, who offers her riches beyond her wildest dreams; all Kate’s establishment caters to almost every possible taste, including the bizarre and the weird, but nothing tastes quite as sweet as revenge.

‘The Song of the Moth’, set in Edwardian London is a twisted tale of obsession and desire. A traditional style fairy tale is given the high gothic treatment. With Nemo’s mother incarcerated in London’s infamous ‘Bethlam Hospital’, the strange young boy is raised amongst the squalor of the poorhouse until he ‘accidently’ bumps into the wealthy gentleman Edward Smithe-Williams. Edward offers Nemo a new life in return for one small favor. Little does Nemo know that Edward’s kindness is a thin veneer that hides his true nature as Prince of a realm that only exists in the imaginations of the insane.

As an extra bonus, the first four chapters of Katie’s novel ‘Beautiful Freaks’ are also included. The short story ‘The Venus Club’ was the genesis for ‘Beautiful Freaks’ after several readers wrote to Katie to ask her to turn the darkly, decadent world of Victorian London into a full length novel. ‘Beautiful Freaks’ explores the dark and destructive relationship between Evangeline Valentine (Owner of No.7, a Gentleman’s club and home to The Palace of Beautiful Freaks’) and Kaspian Blackthorne, an impressionable and doomed young man. Their love affair is set against the backdrop of the violent underworld of Soho and The Haymarket at the time of a series of terrible, paranormal murders. Weaving classic feminist fairy tales into a classic Holmes style detective story, ‘Beautiful Freaks’ is a delicious mash-up of genre, style and stories.

Katie lives in the London suburbs.  Her time is divided between writing, teaching English to teenagers and being mummy to two daughters. She started writing seriously after the birth of her first daughter five years ago. She has gone on to have four of her YA novels published and numerous shorthorror and fantasy stories published by several press houses, including Nexus Press and Winter Goose.

Her series ‘The Knight Trilogy’ is an Amazon.UK number one best selling Fairy Tale series and has been consistently in the top 100 of several categories.

She is currently working on a seven book series called the ‘Meadowsweet Chronicles’, a series about witchcraft in a sleeping English village. Book One is due for publication in the summer of 2013. All of her books are available at Amazon, Barnes & Noble, Waterstones and WHSmith.

Nina D’Arcangela is a quirky horror writer who likes to spin soul rending snippets of despair. She reads anything from splatter matter to dark matter. She's an UrbEx adventurer who suffers from unquenchable wanderlust. She loves to photograph abandoned places, bits of decay and old grave yards. Nina is a co-owner of Sirens Call Publications, a co-founder of the horror writer's group 'Pen of the Damned', and if that isn't enough, put a check mark in the box next to owner and resident nut-job of Dark Angel Photography.
View all posts by Nina D'Arcangela →
This entry was posted in Amazon, Authors, Dark Fiction, Horror, Short Stories and tagged Amazon, Easter, Free download, Katie Jones, Katie M. Jones, promotional, Song of the Moth, The Venus Club. Bookmark the permalink.

2 Responses to ‘The Venus Club’ and ‘Song of The Moth’, by Katie M. John