After: The Echo, Scott Nicholson 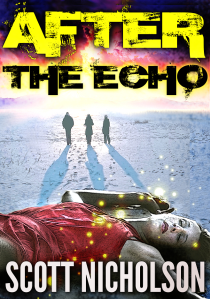 A massive solar storm kills billions and wipes out the technological infrastructure, and the few survivors learn that some among them have…changed.

AFTER: THE ECHO
(Book #2 in the After series)

It’s six weeks after the shock.

The smoke on the horizon has diminished, and Rachel Wheeler and her two traveling companions head toward the mountains where Rachel’s grandfather Franklin has built a survivalist compound.

However, the strange mutated people known as Zapheads seem to be changing from bloodthirsty killers into a force far more menacing. A secret military installation holds the key to rebuilding civilization, but Franklin doesn’t trust their intentions.

And the Zapheads are adapting to the new world faster than the human survivors, who must fight for their place in a future that may have no room for them.

Look for the first book in the series, AFTER: THE SHOCK. The prequel, AFTER: FIRST LIGHT, is coming in May 2013.
—–

Scott Nicholson is the international bestselling author of more than 20 thrillers, including the Top 100 Kindle hits LIQUID FEAR, THE HOME, CHRONIC FEAR, DISINTEGRATION, and AFTER: THE SHOCK. His first novel THE RED CHURCH was a finalist for the Stoker Award. Visit him at www.hauntedcomputer.com.

Nina D’Arcangela is a quirky horror writer who likes to spin soul rending snippets of despair. She reads anything from splatter matter to dark matter. She's an UrbEx adventurer who suffers from unquenchable wanderlust. She loves to photograph abandoned places, bits of decay and old grave yards. Nina is a co-owner of Sirens Call Publications, a co-founder of the horror writer's group 'Pen of the Damned', and if that isn't enough, put a check mark in the box next to owner and resident nut-job of Dark Angel Photography.
View all posts by Nina D'Arcangela →
This entry was posted in Amazon, Apocalypse, Authors, Dark Fiction, Horror, Novels and tagged After First Light, After The Echo, After The Schock, Amazon, apocalypse, barnes & nobel, fiction, Horror, kobo, Novel, Scott Nicholson. Bookmark the permalink.