Insight behind “Sweet Nectar of Life”

Reblogged from Joseph A. Pinto: Insight behind “Sweet Nectar of Life”. 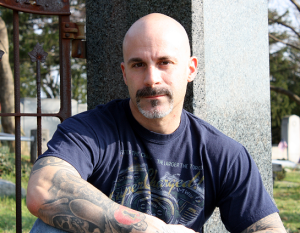 I had a blast writing “Sweet Nectar of Life!”  It wasn’t such a blast getting there, however.

Just months before crafting the tale, my daughter entered this world.  I simply didn’t know how I’d cope.  I’d lost my father to pancreatic cancer only two months before, and the swell and swing of emotions was simply beyond my grasp.  I couldn’t comprehend that my own father was gone, let alone that I was becoming one.  It became a dark time within my heart, and I was oblivious to the sunshine surrounding me.

So how could I have had so much fun writing “Sweet Nectar of Life?”  It became very therapeutic for me; the story spoke and I listened.  My tongue firmly planted in my cheek throughout, it is nonetheless a dark tale, and the suspense and cold dread are without question palpable.  More than anything else though, “Sweet Nectar of Life” taught me an invaluable lesson.  If I did “dad” things instead of thinking I was now a “dad,” well, then “dad” would be just fine.  And I was.  From that point forward, being anything other than a dad to my sweet little sunshine seemed incomprehensible, and still is to this day.

“Sweet Nectar of Life” is currently in the Cruentus Libri Press anthology ‘The Dark Side of the Womb.’  A glowing review for the anthology can be found at Review Folder.

Wet your appetite with a little taste:

Yet did I somehow… no, impossible!  I’m beginning to sound like a crazy man.  But what if… what if I’d inadvertently cursed the child while it still lay in its mother’s womb?  Like the hex the infamous Mother Leeds placed on her ill-fated thirteenth infant, doomed to suffer a fate only the damned could appreciate.

I’d done no such thing, of course.  Not consciously.  Oh but how the worry picks at my brain the way a rat nibbles on discarded scraps!  And I did have my worries.  I was justified to have my worries.  I’d expect any man to have them – but would they voice them as I had?  Raising a child in today’s world… the corruption of society… the erosion of morals… the implosion of economics…  I’m not ashamed for stating that a man and woman could be considered downright selfish for introducing an innocent soul into this cesspool we call humanity.  What is greater – the loss or the gain?

Read more on Joseph Pinto’s blog at Insight behind “Sweet Nectar of Life”.

Or head over to Amazon to pick up a copy: Dark Side of the Womb

Nina D’Arcangela is a quirky horror writer who likes to spin soul rending snippets of despair. She reads anything from splatter matter to dark matter. She's an UrbEx adventurer who suffers from unquenchable wanderlust. She loves to photograph abandoned places, bits of decay and old grave yards. Nina is a co-owner of Sirens Call Publications, a co-founder of the horror writer's group 'Pen of the Damned', and if that isn't enough, put a check mark in the box next to owner and resident nut-job of Dark Angel Photography.
View all posts by Nina D'Arcangela →
This entry was posted in Amazon, Authors, Dark Fiction, Fear, Horror, Horror Anthology, Short Stories and tagged Dark Side of the Womb, fiction, Horror, Joseph A. Pinto, Joseph Pinto, story, Sweet Nectar of Life. Bookmark the permalink.

2 Responses to Insight behind “Sweet Nectar of Life”