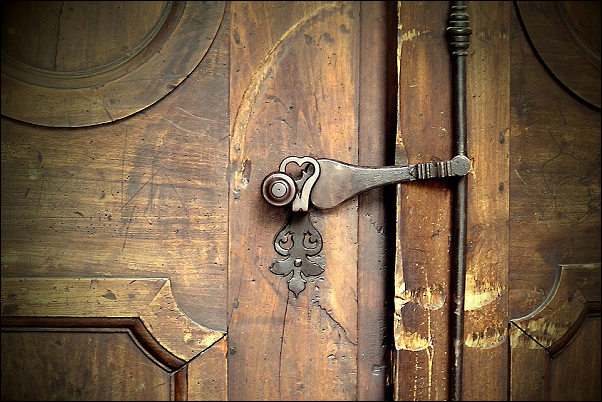 Lift the Latch
by Lydia Prime

It calls to me so fervently; a voice loud and cumbersome.
My heart pounds, the blood abounds, my legs start to numb.
My name it rages for many ages; I don’t believe I can hide for long.
A plan we’ll hatch, just lift the latch; it begins its evil song.

I hear it scream all day and night,
no difference between dream and fright.
Sing-song words come to my ears,
begging for release after all these years.

Lift the latch, come quickly child, just lift the bloody latch.
I lie in bed and always dread hearing those claws scratch.
The unseen locks and crafted stocks keep the beast in place;
In my dreams, at least I think, the loose monster gives me chase.

I SAID LIFT THE LATCH, THAT ROTTEN IRON  LATCH! It senses my discomfort.
I stand before of the weakened doorway; a mistake I have uncovered.
Binding in decay; from within the malfeasance seeps.
Tendrils pass through the door, hunting a body for keeps.

Its growling stops and all I see is black.

I feel more powerful than ever before – I have lost the attack.

Fading, I am fading into the beast’s whim.

We cackle as one and recite an evil hymn. 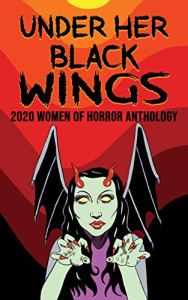 Under Her Black Wings:
2020 Women of Horror Anthology

– A glamorous actress whose very flesh is reanimated by a beloved Hollywood icon
– A Boy Scout Troup encounters a frightening mythological creature in an American forest
– A lonely woman finds a home among a group of lost-and-found souls, all cared for by a tentacled sea-creature called Mother
– A Faceless Woman attacks like a virus and takes on the identities of her victims
– A post-apocalyptic battle for survival rages between human and insect
– A Shadow Woman leads the spirits of the murdered to take revenge in the desert

These are just some of the stories nineteen women came up with when tasked with creating their own Women Monsters. Step inside and experience tales of bloodsucking entities in the jungles of Southeast Asia, Cuban river goddesses, an Aztec bruja, werewolves, mermaids, soul-stealers, obsessive lovers, furious spurned wives, bloody murder in Gothic manors and on Southern plantations… and so much more…

With Foreword by Brandon Scott (Author of Vodou and Sleight, Devil Dog Press)