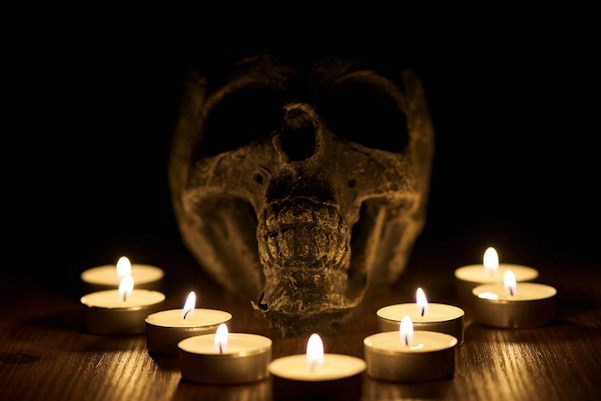 The Encounter
by Stacey Turner

Katya stared at the strange altar she’d found when she walked into her bleak hotel room. A black skull sat upon the table, surrounded by tea lights. She’d barely dropped her keys and purse on the bed, when the lights flickered and went out. The tea lights lit by themselves, one by one, counterclockwise, and the hairs on the back of her neck stood up. She’d had dealings with black magic once or twice or maybe a half dozen times—if she were honest, which she didn’t make a habit of—and it had always left her burned. She began to back slowly towards the door. A faint chuckle from the darkness made her abandon caution, and she was at the door in seconds, but a so was he. A large, masculine form blocked her exit. She couldn’t see his face, but the slight whiff of Sulphur gave his identity away.

“Why have you come, Marcelle?”

“Why do I ever come, Katya? You know the one I seek. Where is your friend?” His voice rumbled as though from a great distance away, but was edged in steel.

“Petra is no friend of mine,” she said, daring to stare at his glowing green eyes, the only thing she could see in the dark.

He chuckled again, as though amused by her protestation. “No friend, perhaps, but family. The witch is your niece, no?”

“No.” She spat through her fingers, a gesture to ward off evil. “She was born of my brother’s seed, but she is átkozott, as you well know. She is the reason I have wandered this earth for centuries, cursed too.”

Marcelle gazed at her, waves of anger and hatred roiling off him, the heat scalding. “Do not speak to me of curses, Vámpír. I wandered the earth and hell long before you were born, longer before you were turned. And I will continue to do so until Petra is ended. She cannot play her games forever.”

Katya shrugged. “I think you underestimate your prey, Demon.”

He snarled, but must have accepted her words, because in a gust of hot air, he was gone. The tea lights extinguished, whether by magic or from the wind, Katya didn’t know. She flipped the light switch and her hotel room appeared the same as it always did—depressing.

She shook her head, sitting down on the bed. With a sigh, she dropped her head into her hands, cursed in her native Hungarian, and made a decision. It was time to return to Pine Haven.

What happens when a naive mermaid decides to leave her underwater paradise to live on the land?

Hazel was the first in her clan to forsake the ocean in favor of land. She thought Pine Haven, a town founded for paranormals to live in safety, would be the perfect place. But her involvement with one of the town’s two human residents raises eyebrows and suspicion.

Why is her nosy neighbor, Leo, keeping tabs on her? And why does he look so darn good in those tight clothes?

When Hazel finds herself in trouble she learns who really cares about her and how powerful accepting your true nature can be.

Nina D’Arcangela is a quirky horror writer who likes to spin soul rending snippets of despair. She reads anything from splatter matter to dark matter. She's an UrbEx adventurer who suffers from unquenchable wanderlust. She loves to photograph abandoned places, bits of decay and old grave yards. Nina is a co-owner of Sirens Call Publications, a co-founder of the horror writer's group 'Pen of the Damned', founder and administrator of the Ladies of Horror Picture-prompt Monthly Writing Challenge, and if that isn't enough, put a check mark in the box next to owner and resident nut-job of Dark Angel Photography.
View all posts by Nina D'Arcangela →
This entry was posted in Authors, Dark Fiction, flash fiction, FREE, Horror, Ladies of Horror, Writing Project and tagged author, fiction, flash fiction, Horror, Ladies of Horror, picture prompt, Stacey Turner, Writing Project. Bookmark the permalink.