Alice blinked the sleep out of her eyes and gazed around at where she had found herself.

A moment ago, she had been firmly ensconced in her bed, sound asleep. And now here she was, in the middle of a road through a dark forest. Small animal noises disrupted what was otherwise an intense silence.

She looked down at herself—yep, not even dressed in her blue dress and pinafore. Nothing on her feet either. Nothing but her night dress. Or, rather, the Institution’s idea of night clothes. They looked a lot like the day clothes, at least in her part of the world. But she remembered the blue dress, the black shoes, and the white pinafore.

“You could have at least dressed me for this trip,” she grumbled. “Oh well, let’s see where we are.”

She started down the road, which in the moonlight shone with a pale gold color. She peered closer—were those bricks?
Suddenly she had the weird urge to skip. So she did.

On her left, the trees suddenly changed to a different scenario. Instead of tall pine trees, she was now facing an orchard of apple trees. The trunks were odd—each tree looked as if it had a scowling face engraved on it.

“Curiouser and curiouser,” she mumbled to herself. Well, if she could believe that she had had an intelligent conversation with a worm, anything was possible.

Dead set in the middle of the orchard was a cabin. The door hung open; in Alice’s world, that was an invitation to explore. So she did.

There wasn’t a lot inside except a store of oil in flasks and a lot of rust remover. Alice checked out every last nook and cranny; she remembered her friend Goldilocks telling her about so much treasure in such places—if one was fast enough. Nothing here though.

As she stepped back out of the cabin, Alice accidentally stepped off the path. Such screeching from flowers and grasses, insulted mightily that she had put a foot on their backs!

“I don’t think we’re in Kansas anymore,” Alice said to herself. Then she shook her head.
Kansas? What was that?

“I do believe that’s my line.”

A girl about her age, dressed in blue gingham, stepped in front of her. She had a frown on her face and a huge scarecrow at her side. He looked to Alice as if he didn’t have a lot of brains, but who was she to judge? After all, chess pieces had at one time tried to rule her life. You never knew.

Alice gave the newcomer her own brand of frown, which included a large showing of teeth—not all of them normal. The Institution had no sway over her here—if it did, she would have felt it by now. Any other time she had left, she’d always felt an invisible cord drawing her back. She felt more free than she had felt in years—ever since her family had decided that she was safer in a padded room.

Instead of restriction, she felt a freedom that she had not felt in years. She was not about to ask any questions, for fear that the illusion might disappear and she would find herself in her little room again, under the leather bindings.

Without a second thought, she lunged at the girl in gingham. The scarecrow just hung back, a useless idiot, while Alice pulled Dorothy to pieces.

Then she dressed in the blue gingham, looped her arm in the Scarecrow’s, and skipped down the road to wherever they had been going.

The tin man never had a chance to be removed from his spot. He simply whined as they disappeared over a hill. 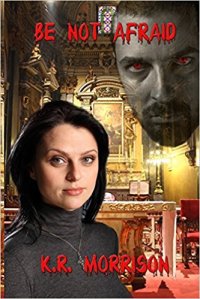 Nina D’Arcangela is a quirky horror writer who likes to spin soul rending snippets of despair. She reads anything from splatter matter to dark matter. She's an UrbEx adventurer who suffers from unquenchable wanderlust. She loves to photograph abandoned places, bits of decay and old grave yards. Nina is a co-owner of Sirens Call Publications, a co-founder of the horror writer's group 'Pen of the Damned', founder and administrator of the Ladies of Horror Picture-prompt Monthly Writing Challenge, and if that isn't enough, put a check mark in the box next to owner and resident nut-job of Dark Angel Photography.
View all posts by Nina D'Arcangela →
This entry was posted in Authors, Dark Fiction, flash fiction, FREE, Horror, Ladies of Horror, Writing Project and tagged author, fiction, flash fiction, Horror, K.R. Morrison, Ladies of Horror, picture prompt, Writing Project. Bookmark the permalink.