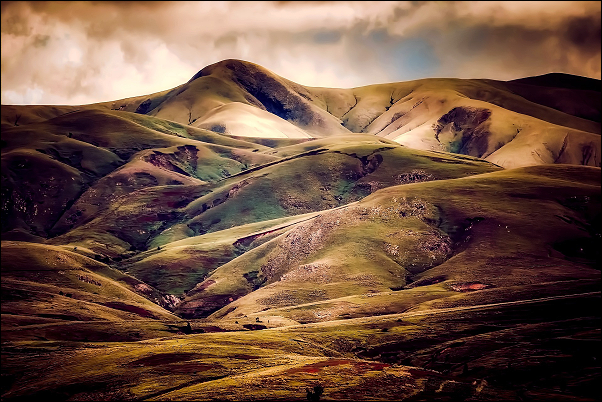 Battling Against Nature
by E.A. Black

US troops rode many miles over endless Afghan dunes. Private Pearce feared for his life. Would he be blown up by terrorist gunfire and bombs? Why the hell were soldiers dragged all the way out here to the end of the earth to save a stupid statue?

“That’s no ordinary statue,” his best friend Private Jones said. “It may be the third Bamiyan Buddha. You know the Taliban blew up the other two. I heard they were amazing to see. Simply stunning. Hundreds of feet high carved into a cliff.”

“I’m not a budding archeologist like you. I don’t see why we have to risk our lives,” Pearce said.

“If it’s here, you’ll see why. Rumor has it it’s protected by Buddhist gods. We’re coming up to the spot now.” Jones said. “I hope we’re not too late. The Taliban is quick. If it sees a chance to destroy this statue it will take it.”

Sand blew hard in a red cast sky as if the heavens had been lit on fire. Dozens of tire tracks lead through the sand but ended abruptly only yards ahead of the convoy. A sandstorm loomed ahead, preventing the troops from entering the area but the sight of overturned trucks proved the Taliban had unwisely ventured forth. Pearce listened to the raging winds and swore he heard uncanny and inhuman voices shouting in Arabic.  He watched several Afghan soldiers flee their trucks leaving bombs behind to escape the torrent but the sand swept them up, forever silencing them. As the storm approached the U. S. convoy, Pearce panicked, wanting to drive out of the area but the commanders forbade it. He squinted into the storm and was shocked to see what appeared to be an angry face within the sand. Before he could get a good look at it, the storm ended as quickly as it had begun. Afghan soldiers and their trucks had been covered in mountains of sand, leaving behind no survivors. Pearce immediately became a believer and never again doubted the existence and importance of the third Bamiyan Buddha.

The statue was able to take care of itself. 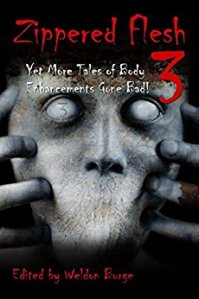 What horror anthology on body enhancements wouldn’t include gross-out fiction? This book has it in spades. But, this collection of stories goes far beyond that. Here you will also find science fiction, surreal fiction, fantasy, and even a full serving of dark humor. Disturbing, perverse, often gut-wrenching (pun intended) stories—all between the covers of this anthology!
Nineteen chilling tales by some of the best horror and suspense writers today. Definitely not for the squeamish!

“Hardcore horror that ranges from the socially relevant to the scatologically repulsive—the shock here is like ‘The Scream’ made flesh.” — Mort Castle, editor of On Writing Horror: A Handbook by the Horror Writers Association

“In Zippered Flesh 3, Editor Weldon Burge has done a masterful job of combining work from well-known masters like Jack Ketchum and Graham Masterton with newer writers. But it is the original work by newcomers like L.L. Soares and Meghan Acuri that stands out for me. … Highly recommended.” — Gene O’Neill, author of The Hitchhiking Effect: A Retrospective Collection

“‘Closer by Charles Colyott is a wonderfully poignant and romantic story. … ‘Going Green’ by Christine Morgan is so original, timely, and well-written it deserves special mention. … Kudos to Burge for putting together another fine anthology of cutting-edge fiction.” — Paul Dale Anderson, author of The Instruments of Death series