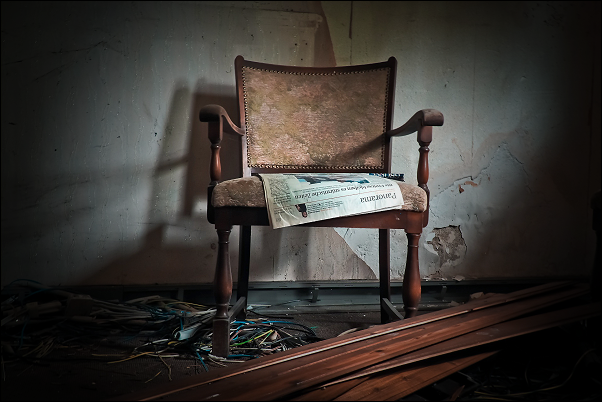 Uncle Edward’s chair stands by the hearth awaiting his return, a folded Jewish newspaper, across its faded floral seat. The room’s once paisley covered walls are water-stained and peeling like dead skin. Above the dust, a musky perfume lingers as if to mark Belle’s passage.

Such a pretty thing she was, with silvery eyes and walnut hair beneath her parlor maid’s white cap. Exchanging winks and blowing kisses, she’d lead him downstairs to her room.

What gaiety they shared in secret – tickle-slap, and giggles! The muffled moans beneath the sheets, and not a one of us suspected. The shame of it!! Belle’s specialty went further than a frolic in mid afternoon. Alive, our Edward never realized that monster guised in loving bliss. Nor did he feel her fangs upon his throat. Within Belle’s thrall, he drank her blood, which was her plan, his destiny.

Thus turned, he has eternity with her. But as for us, his relatives — she drained our lives away. We remain behind, mournful specters in this rotting manse. Suffice to say, we’re not amused.

Small Spirits is another of the poems-for-art duets by Bram Stoker® Award winning poet Marge Simon and artist Sandy DeLuca. These unusual poems involve dolls of many sorts, including legends from countries all over the world. You will find small spirits of the wicked, the damned and the beloved. Be prepared for the mystical, magical and often misanthropic dolls in this colorful collection.