Her cloak thrown carelessly on the chair,
a field of rolling velvet hills where
up and down spiders swarm,
drawn to a decanter tinged
with garnet — Muguet from Paris,

created at the first of World War I,
and none to follow for a year –
the survivors might as well have
bought the scent of perfumed blood.

Certain songs of times gone by
of young men dying in the trenches,
with only crumpled memories of home,
letters scented with Muguet,
signatures in carmine kisses.

The air is thick with shadowed secrets –
like the single rose she puts beside
her precious, priceless perfume,
darkly sacred as her memories.

She never charged conscripted men,
forgets she died in 1924. 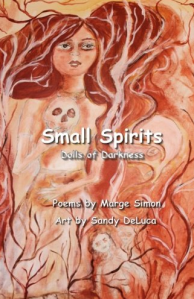 Small Spirits is another of the poems-for-art duets by Bram Stoker® Award winning poet Marge Simon and artist Sandy DeLuca. These unusual poems involve dolls of many sorts, including legends from countries all over the world. You will find small spirits of the wicked, the damned and the beloved. Be prepared for the mystical, magical and often misanthropic dolls in this colorful collection.