A. Giacomi, otherwise known as the Poetic Zombie is an author and educator from Toronto, Canada, with a love for the written word as well as a zombie enthusiast. She’s been a zombie fan from a very young age, so it’s no wonder that her first venture into authordom led her straight to the zombie genre.

She has been a fan of the horror genre since she could pick up a novel. Giacomi is inspired by many authors such as Poe, Stine, Rice, King, and Harris, just to name a few. She loves a good scary tale with quirky elements and tends to stick to the classic horror formula and tradition that had her hooked as a child. Giacomi has always loved classic horror monsters like vampires, werewolves and above all zombies. Although these monsters have been seen in literature and movies countless times now, they never bore her and she always finds a way to breathe new life into these characters.

She currently has book 1 and 2 of The Zombie Girl Saga out from Permuted Press. You can get them anywhere ebooks are sold. The story centers around Eve, a teenager infected with the Azrael Virus, a very ancient strain of zombie virus unlike any you’ve ever seen on television or in films. This virus slowly turns its victims into the undead, but not without a few perks along the way. You can argue that Eve is a sort of undead superhero, but at the heart of the series, the story is all about human will, and the refusal to let death win.

Where does Giacomi get her inspiration from? From zombie films of course, but she’s also a self-proclaimed fangirl. She’s in love with comics, Spiderman being her favourite hero, anything Tim Burton, Star Wars, Walking Dead, Sailor Moon, and a huge fan of Halloween and horror films. To say her tastes are all over the map is an understatement, but it’s what makes her writing unique and filled with pop culture references that any pop culture junkie would appreciate.

Want to know more about her? Check out the following links for the most up to date information on her writing as well as her fun fangirl posts: 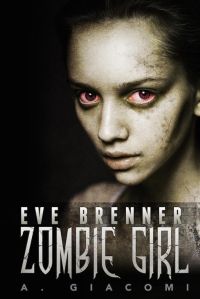 Eve used to be an ordinary girl, from an ordinary town, with ordinary dreams, but her dreams rapidly turn into nightmares when one grave mistake leaves her a little less than human and a lot less average.

Eve’s not quite the same girl she used to be. She desperately clings to her humanity as new desires, new abilities, and new urges take over with each passing day.

Eve Brenner: Zombie Girl is a tale that takes you on an emotional and terrifying journey as Eve struggles to cope with her new life and find a cure for her strange illness before time runs out. She desperately clings to her humanity as she tries to control the monster she knows is lurking inside her.

Turns out living was the easy part.

Ready to dive into The Zombie Girl Saga? Then check out the links below for where to purchase the books.

Warning you will become attached to characters and feel inclined to turn pages rapidly to find out what happens next!

In this second installment of The Zombie Girl Saga, Eve teams up with CSIS to find out more about the Azrael Virus coursing through her veins. As she learns about the dangers of the virus, she also learns that there are some advantages to being less than human. Eve is quickly thrown into fieldwork to stop the spread of a virus that is spreading silently on a global level.

She might be the only hope the world has, but she’s running out of time.

Nina D’Arcangela is a quirky horror writer who likes to spin soul rending snippets of despair. She reads anything from splatter matter to dark matter. She's an UrbEx adventurer who suffers from unquenchable wanderlust. She loves to photograph abandoned places, bits of decay and old grave yards. Nina is a co-owner of Sirens Call Publications, a co-founder of the horror writer's group 'Pen of the Damned', and if that isn't enough, put a check mark in the box next to owner and resident nut-job of Dark Angel Photography.
View all posts by Nina D'Arcangela →
This entry was posted in Authors, Horror, Women in Horror Month and tagged A. Giacomi, author, Horror, Wihm7, Women in Horror Month. Bookmark the permalink.