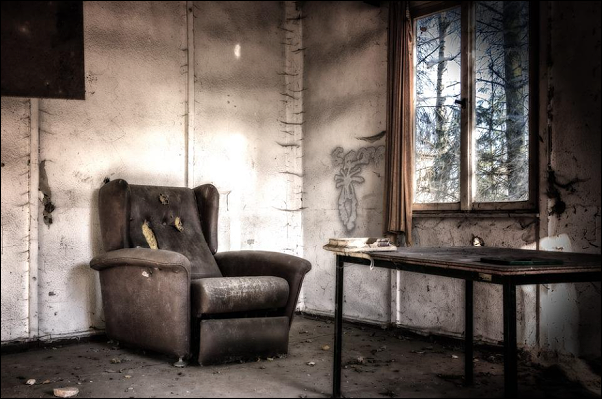 Bradley rose as the crimson beams of dusk began to creep into the old house. The days were at their longest this time of the year making the sunsets spectacular; Bradley never missed one. He sat in his old chair as a large sigh emerged, he leaned back and lit a cigarette. Always sullen and melancholy, the sunsets and the single cigarette brought him momentary joy.

The old house began to creek and moan as the warmth of the sun was now a thing of the past. The beams in the disheveled cabin were starting to tremble at an inaudible, deep hum. Bradley could feel the vibration and knew that his time by the window was ending. His senses were becoming stronger and stronger as he stood. He knew that tonight was the night that the house would get what it wanted. Bradley understood the consequences when he became the caretaker at the aged, mountain cabin. He had struck an unsteady alliance with the spirit that dwelled within. However, lately the ancient specter’s insistence to bring back his prey still alive was becoming troublesome for Bradley. The sorcerer’s demented spirit was very powerful but bound to the land that the cabin rested upon. It called to the sad and lonely to do it’s bidding and Bradley answered.

Tonight was another hunting expedition, another kidnapping, another murder; Bradley tilted his head to the side and cracked his neck. He placed his hand on the door knob as the sorcerer’s voice boomed in his head, “Thou shall bring me a woman; a clean woman. Thou will bring her to me shackled. Are ye understanding?” Bradley only nodded his head.

He stepped into the cool summer air and immediately felt rejuvenated. Bradley made his way into the small mountain town that lay below the cabin and began his hunt. The most exciting time for him was when he spotted the perfect victim. Bradley knew that eventually he would be caught and labeled “America’s Most Prolific Serial Killer”. Until the time would come that he would have to pay for his crimes, he killed as many women as he and the house wanted. He knew that the house allowed him to pursue his need for the hunt, the kill, the feeling of sheer bliss that followed a magnificent kill. The ancient, powerful spirit protected him from law enforcement by concealing his location.

He spotted two young women walking towards him. He immediately could feel his blood pulsing through his groin. He knocked one out and the other he dragged into the darkened alley way. As she lay there unconscious he went and retrieved the other for the house. He began his ritual on the alive but limp body of his victim. He thrust his knife into her abdomen and sliced all the way up to her breast bone. He removed her beating heart and bit into it. He could feel his warm, sticky manliness run down his leg. Bradley threw his head back and sighed loudly. His ritual and release had been completed. He had his sacrifice and the spirit would have his.