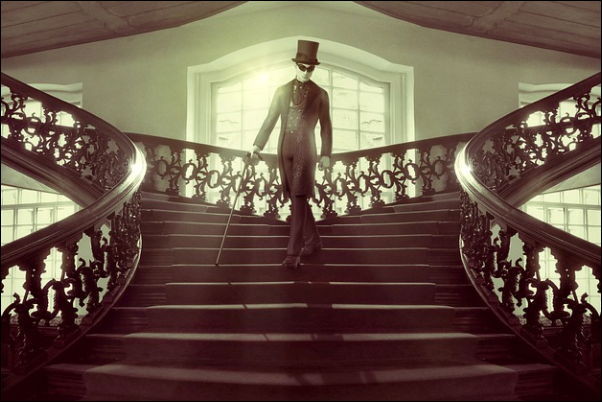 The Bride of Whitmore Hall
by Naching T. Kassa

Sundown erupted beneath a tortured sky of crimson and gold. I knew it was a portent of evil to come, but I went along with them anyway.

They were the bridesmaids—Candy, Jessie, Sherry, and Linda. I’m one too, except I don’t hate Rachel like they do. Believe it or not, Rachel is our best friend. She’s supposed to marry Bobby Kleinstead tomorrow. The Bobby Kleinstead, the cutest guy in Spearsville.

Candy was furious when she found out Bobby proposed to Rachel. Seems they had been an item for a few months before he found out what a gold digger she was. He’d started dating Rachel after that, and you know, the rest is history.

Except it wasn’t history for Candy. She hated Rachel for it. Oh, she was nice to her face—Candy’s the type who keeps her friends close and her enemies closer—but she was definitely sharpening the knives behind her back. And we were the knives.

She told us all a bunch of stories about Rachel, about how she was the only one who could break the curse at Whitmore Hall.

Oh, wait, I didn’t mention the curse yet, did I? I know this is a lot of exposition, but bear with me. I’ll get to the good stuff soon enough.

Whitmore Hall is the scariest house in town. A guy in the 1800s owned it, built it for his bride. Unfortunately, the bride’s father decided she should marry some stooge from another town, and she wasn’t the kind who stood up for herself. When the groom tried to convince her, the father had him shot. He died on the grand staircase of his mansion, but not before he cursed every wedding in Spearsville. Anyone who weds here is doomed to die.

Nobody believed the curse at first. Twelve people had to die, all brides and grooms, before they took it seriously. Most of them died horrible deaths, reduced to a pile of broken bones and limbs, more like a pile of dead meat than anything else. That’s when weddings were outlawed here.

The only way to end the curse was to give the ghost a new bride. Candy wanted us to give him Rachel. She came up with a plan.

First, we would blindfold Rachel. Then, we would bring her to the mansion under the guise of a surprise bachelorette party. Once there, when the ghost arrived, we would offer her as a sacrifice. It seemed to be a foolproof plan. Except…it really didn’t go that way.

You see, neither Candy, nor Jessie, nor Sherry and Linda know Rachel like I do. I’ve been friends with her way longer than any of them. I know her secrets and she knows mine. They thought she’d freak when they removed the blindfold. That she might scream when she realized where she was. They didn’t expect the smile.

“Thank you, girls,” Rachel said. And there were tears in her eyes. “I have always loved this place. Ever since I was little, I’ve wanted to get married here. I guess this is the next best thing.”

The silence grew awkward. They hadn’t expected her to like it.

Footsteps filled the vacuum their voices had left. They tapped on the staircase as someone descended.

The ghost appeared then. He stepped into the moonlight provided by the largest of three windows and stared down. Clad in his Victorian suit, complete with top-hat and cane, he reminded me of Gary Oldman’s Dracula. He even had the dark glasses, though he didn’t have the long hair. One word described him. Sexy.

Everyone froze, even Rachel. I began to tremble, and I couldn’t meet his eye.

“We are women of Spearsville,” Candy said. “We’ve come with a gift in hopes that you will end the curse.”

She grabbed Rachel by her arms and pushed her to her knees. Rachel’s eyes grew wide. Ever the drama queen, Candy shouted, “Here is your bride!”

I stepped forward then, my knees like Jello. “Um…no, actually. It’s not her. It’s me.”

The ghost peered at me. “Myrna?”

“My darling, I could never hate you.”

I took a deep breath and climbed the stairs. James, my James, smiled and held his hand out. I hurried up the steps and into his arms.

“Who are these ladies, my love,” he asked.

“The pretty brunette down there is Rachel. She’s my best friend. She’s taught me a lot.”

“What of the others?”

I turned and frowned down at the other four. “Dead meat.”

Crystal Lake Publishing proudly presents Arterial Bloom, an artful juxtaposition of the magnificence and macabre that exist within mankind. Each tale in this collection is resplendent with beauty, teeth, and heart.

Edited by the Bram Stoker Award-winning writer Mercedes M. Yardley, Arterial Bloom is a literary experience featuring sixteen stories from some of the most compelling dark authors writing today.

With a foreword by HWA Lifetime Achievement Award Recipient Linda D. Addison, you are invited to step inside and let the grim flowers wind themselves comfortably around your bones.