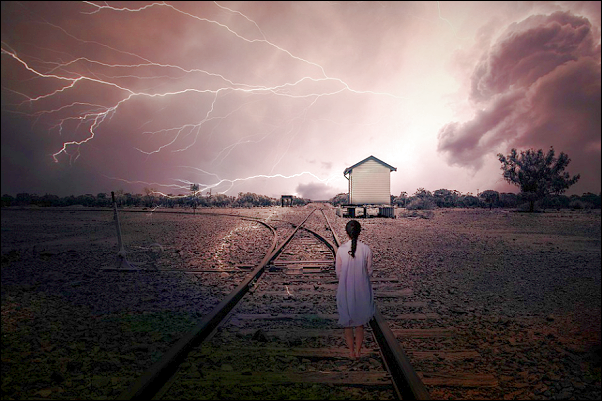 The Last Judgement
by Kendra Hale

Baitsville had been named back in the 70’s as a way to save the hidden valley town. The atmosphere and the views were certainly something to behold but the problem had been being off the map, not having any acclaim, and just genuinely being a slice of smalltown Americana. The town had renamed itself as a way to promote their three lakes that bordered the small shops and communities. It had become a fishing tourist attraction, a place where fishermen dreamed of coming for the best stories of the catch of a lifetime or the catch that got away.

It already was a crossroad town for the railroad companies, One central track that cut through the edge of town  and another set of tracks that had almost been completely taken back by nature. ones that had stopped being used because the cities they had visited had fallen off the map. Just like Baitsville once almost had.

Mags had walked the train tracks since she was little but her Father had always warned her of the tracks that led to nowhere. Never to go down that path. Now twenty five and fully clear on what path her life would take, she knew what lay down that path. Her Father had chosen Baitsville for a far different reason than the droves of Fishermen who came seeking the fame of their photo of their catch on the walls of the halls of the municipal buildings.

Her father Gregory, pronounced “Gra-gory” , was a hitman. An assassin who held his own established list of rules and morals that he had accumulated from the last forty five years of service. To Mags he had always been Dad, or Pa, but to those who hired him through his channels he was the Cold Blooded Siren. A voice like an angel with the wicked motives of the devils.

Down the forgotten tracks was where Gregory had laid to rest those who were never to be found, and in a remote and dismissable town like Baitsville, it was easy to remain hidden and safe. His morals and killing style never allowed for children, nor innocents. Her father had always done the time to recon and research the targets and when Mags had turned eighteen and the full volume of what her father was came down like an avalanche…she knew it was her birthright.

She learned what she could from her father, never shying away from any of the missions or opportunities to learn. She had a mask like her father that allowed for whatever possibilities she required to have or might need to pull from. Like a boy who morphed to impress the girl he long to impress, Mags had drunk from the well and there was no end to how she could maneuver herself.

Her father had made one wrong deal and they had made him pay for it. Revenge broke one of her fathers rules but she gave no care to it for no one knew of her existence. Her father had achieved when it came to the rule of the double life. He had two faces and those entwined branches of his life had never met, not really. She had always conveniently been out of the way should the chance happen that someone from his real vocation were to show their face in their town.

Mags had watched him be so through that sleep must have been like a dream.

As she crossed the tracks the air was electric and rain was coming but so far had held out. Heat lightning crossed the sky and lit up the turnstyle that led to her father’s workshop. Hidden deep down the turn of the tracks. Where nature had fully taken the metal and wood back into her keeping.

She knew the man responsible for her father’s passing was hoping for a hint of mercy from her. She would give him none. Her plump figure held the secret of muscles that she had built just for the crack of the whip that with each lash echoed the crack of the lightning and flayed the flesh from the man. The man who had thought he was smarter than her father, which who knows it might have been the case, but Mags knew it was just dumb luck that had led this man to Gregory O’Brennian.

Mother Nature got a well known addition to her dirt palette, and with each stroke the man’s eyes screamed since his vocal chords were paralyized. Not that hearing his screams would have landed him any mercy, but the decibels hurt Mags’ head and a headache was not what she wanted. She was here solely to make this man feel each and every stroke as she performed the one death reserved for her enemies. Ones who would make it personal, though with her old man now gone this man would be the only one to step over that line. She would make sure she enjoyed every last moment.

St. Bartholomew would know this man’s pain, after all she had fashioned this death to symbolize a holy moment and the pride this man must have felt conquering her father. Let him choke on it. He had days left to give her…