The Petrified Witch
by A.F. Stewart

Legends are a strange thing. They grow and morph and fester in the consciousness, changing their substance until only a core of the truth remains. They nestle under the surface of reality, misshapen dormant lumps, waiting to be forgotten. Yet, they remain unchanged at their nucleus, remain intoxicating in their potential. Their tales may stray and ramble, fade into the background, but always their dangerous heart beats steady.

As it is with the Petrified Witch.

Deep in the center of a dark glade, jagged stone rises from the shallow confines of murky water choking with the stench of decay. Shrouded in a thick fog, a deadened tree clings to the top of the rock, too wilful to crumble into dust.

The younger villagers laugh when they hear the stories, mocking tales of curses and witches, of a murdered woman, death caused by fear and superstition. They dismiss the warnings and go where they please, wander too far and too long. Venture too close to a legend.

Yet, they don’t laugh when they see the furious, screeching face etched into the stone, or inspect the tree, noting it resembles a human hand. Then shivers creep along their spine and voices in their head whisper, run.

Too late, though, for anything but screams when the fingers reach out and grab their throat. Too late even for screaming when a legendary curse strangles the life from them. 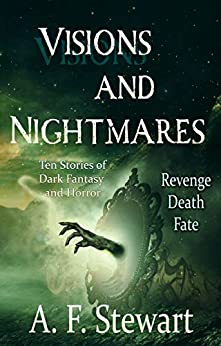 Tragedy spares no one… and takes no prisoners.
In the twilight shadows, secrets are revealed past the whispers of madness.