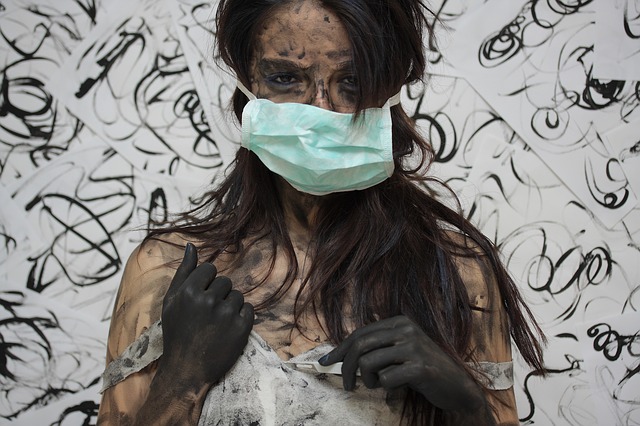 “They are not like us.” She reminded herself as she dragged the scalpel over the taught flesh. The black blood that sprung forth solidified the otherness of the specimen.

Her experiments proved that science was on the side of humanity. The visitors, while experts at intergalactic travel, were barbaric in their conduct and basic in their anatomy. They did not even have the sense to avoid capture.

The black blood thickened quickly upon exposure. “It is not nuanced like our own,” she said aloud but kept the added appraisal “they are monsters” to herself.

The blood that had splashed on her hands pulsed and vibrated. She wiped her hands on the wall behind her, trying to scrape the blood loose and also put an end to the eerie feeling.

“They are inhuman…not human…” she whispered, pulling out an otherworldly organ and wondering if it were meant for digestion or reproduction. The organ felt hot, and she slammed it onto the examining table, creating more splatter on the wall.

When she turned to look, the blood had dripped into configurations that looked like writing.

She grabbed the guide that translated the visitors’ language. Initially, the humans had tried communicating, but soon realized the visitors were designed to fulfill a thirst for knowledge.

“Are what?” She took the scalpel and stabbed the flesh of the creature in front of her. She stabbed hard enough to direct more blood onto the wall.

Something about that affirmation angered her. She felt as if the words were judging her.

“They are not like us,” she intoned, running her fingers through the blood and painting over the words

“They are not like us,” she repeated each time a specimen tried to persuade her with its bloody words.

Nina D’Arcangela is a quirky horror writer who likes to spin soul rending snippets of despair. She reads anything from splatter matter to dark matter. She's an UrbEx adventurer who suffers from unquenchable wanderlust. She loves to photograph abandoned places, bits of decay and old grave yards. Nina is a co-owner of Sirens Call Publications, a co-founder of the horror writer's group 'Pen of the Damned', founder and administrator of the Ladies of Horror Picture-prompt Monthly Writing Challenge, and if that isn't enough, put a check mark in the box next to owner and resident nut-job of Dark Angel Photography.
View all posts by Nina D'Arcangela →
This entry was posted in Authors, Dark Fiction, flash fiction, FREE, Horror, Ladies of Horror and tagged author, Elaine Pascale, fiction, flash fiction, Horror, Ladies of Horror, picture prompt, Women in Horror, Writing Project. Bookmark the permalink.