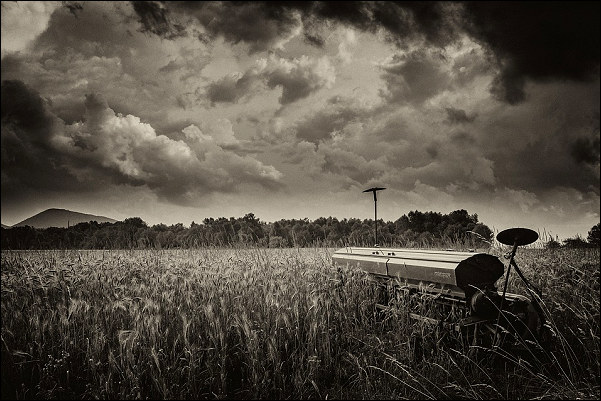 The wind whipping through the field formed a low howl that made Elena think of a wounded animal. She was something wounded too. The blood had been dry on her face and neck for a few hours now, but it felt tacky when the skin moved. She’d taken a break from digging, her hands throbbing with newly formed callous, and leaned the shovel against an old tractor. She took a deep breath and eyed the place she had buried the combine harvester blade she’d found by sheer luck in the old shed. It was rusted and covered in a thin sheen of blood she’d tried to wipe off on the underside of her skirt.

The hole was about 3 feet deep now and subtly oblong. Not deep enough.

When Hank threw her down the stairs she lost the baby. She sobbed in a heap on the landing, bleeding through her gown. Hank stomped into their bedroom and slammed the door. When he finally managed to get out of bed the next day, Elena still lay where she’d fallen, too faint from grief and blood loss to move.

“Get your ass up! Ain’t no seed can grow in a fallow field anyway don’t you know that?”
Elena wailed, and Hank softened a bit.

“Come on, pigeon. Get cleaned up. We already missed the morning service.”

She had gone to the shed for a rope to hang herself. The harvester blade was leaning against the back wall.

“The fuck you doing out here?? Didn’t I tell you to get cleaned up?”

“I’m sorry, I…” Elena’s hand wrapped around the blade as he interrupted her.

“I’m sorry? That’s all you gotta say always! If you just did what I –“

Elena swung wide. Hank’s tirade was interrupted by the harvester blade biting into the side of his throat. He gargled and spat and reached impotently toward Elena. She stepped backward and let him fall on his face in front of her.

She smiled down at his body, laying beside the hole she’d been digging.

Nina D’Arcangela is a quirky horror writer who likes to spin soul rending snippets of despair. She reads anything from splatter matter to dark matter. She's an UrbEx adventurer who suffers from unquenchable wanderlust. She loves to photograph abandoned places, bits of decay and old grave yards. Nina is a co-owner of Sirens Call Publications, a co-founder of the horror writer's group 'Pen of the Damned', and if that isn't enough, put a check mark in the box next to owner and resident nut-job of Dark Angel Photography.
View all posts by Nina D'Arcangela →
This entry was posted in Authors, Dark Fiction, flash fiction, FREE, Horror, Ladies of Horror, Writing Project and tagged author, fiction, flash fiction, Horror, Ladies of Horror, Michelle Joy Gallagher, picture prompt, Women in Horror, Writing Project. Bookmark the permalink.