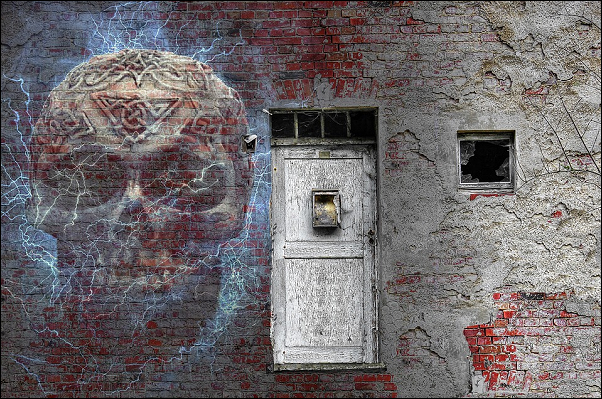 “Why would you have a door like that? It’s two feet up the wall. And what is that chute thingy for in the middle? If it went IN, I could see it as a mail chute, but it comes OUT. What was this place?”

“No clue. It doesn’t look like it’s been anything for a very long time. Look at the state of the plaster…”

“I wonder if Mrs. Brighthart would know…”

“Maybe. She’s been here longer than anyone.”

I didn’t like Mrs. Brighthart. She gave me the creeps, but Tony was right. If anyone would know it would be she. We walked down the road and knocked on her door.

“Yes?” came a wavering call from inside.

“Mrs. Brighthart? It’s Liam and Tony. We’d like to ask you a question about the house at the end of the lane.”

“You don’t want anything to do with that place, lovey. It was a charnel house during the Famine. Strange things happen there…and woe-betide anyone caught up in them.”

“They say that if you see a skull appear outside it, you’re destined to die within the hour.”

“Am I standing here talking to you?”

Just another ghost story, I thought.

Tony was laughing as we walked back down the lane. “That old lady is wack! But the door makes a little more sense now. They could just drive the wagons up to the door-sill and unload…”

I shivered. “Gives me the creeps.”

We were close to the house at the end of the lane, but to me it looked just as it always did.

He shoved me, hard.

I stumbled out of the street onto the walk…just as a car slammed into him. He was dead before he hit the pavement.

Stay away from the house at the end of the lane. It’s cursed.

Nina D’Arcangela is a quirky horror writer who likes to spin soul rending snippets of despair. She reads anything from splatter matter to dark matter. She's an UrbEx adventurer who suffers from unquenchable wanderlust. She loves to photograph abandoned places, bits of decay and old grave yards. Nina is a co-owner of Sirens Call Publications, a co-founder of the horror writer's group 'Pen of the Damned', founder and administrator of the Ladies of Horror Picture-prompt Monthly Writing Challenge, and if that isn't enough, put a check mark in the box next to owner and resident nut-job of Dark Angel Photography.
View all posts by Nina D'Arcangela →
This entry was posted in Authors, Dark Fiction, flash fiction, FREE, Horror, Ladies of Horror, Writing Project and tagged author, fiction, flash fiction, Horror, Ladies of Horror, picture prompt, Rie Sheridan Rose, Writing Project. Bookmark the permalink.