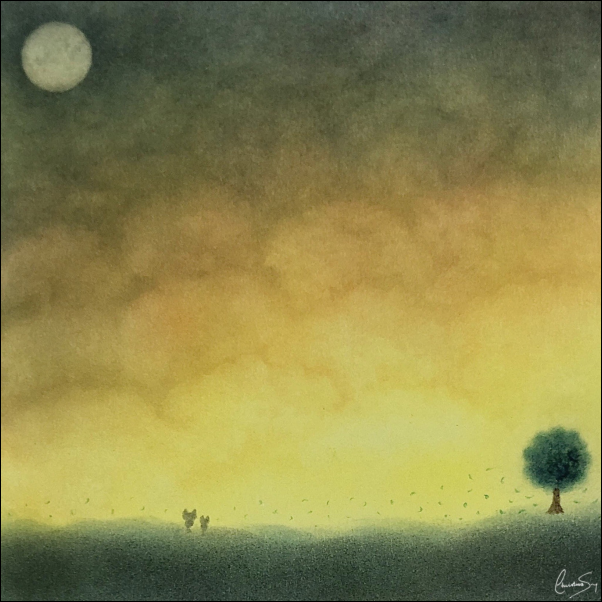 In a Field of Wheat
by R.A. Clarke

The sky darkened, the golden sun disintegrating into hues of rusted metal. We walked through the field of wheat, each seed-tipped stalk whispering secrets in the light breeze. Our footsteps slowed as we approached the tree at the top of the hill—our tree.

The tree we carved our initials into senior year. The tree we were married beneath.

There wasn’t any better place than this.

“I don’t know.” I stared at the amber cloud billowing on the horizon. Churning mounds of smoke and dust, growing and morphing as they steamrolled towards us.

Emmy turned to me, eyes imploring. “Maybe we should go back to the house? We still have time to plug the vents.”

“This isn’t something we can ride out, babe.” I squeezed her hand, meeting her gaze. “Eventually we’ll need to go outside. For food, water, medicine. Our supplies won’t last forever. I mean, we couldn’t even get enough wood to board the windows. The shelves are bare. Everyone’s gone crazy.”

The last shred of hope withered on her face, and my heart fell. Wrapping her in my arms, I kissed her forehead. “Boarded windows and plugged vents won’t help. The air would still get in no matter what we did. Or something else would.”

“You mean one of them…” Emmy said, her words a breathy whisper. She buried her face in my chest, shoulders shaking as tears swelled.

I nodded, unable to keep the moisture from gathering. Blinking fiercely, I cleared my throat. “Everyone we know might become one of them. You and me—” My voice broke.

I couldn’t let that happen.

News reports all over the world showed the horror this cloud carried. It was moving so fast. People within the mist were changing, ripping each other apart.

But to where? Early projections showed this unearthly cloud would cover the globe in a week. Maybe two. It would be the same no matter where we went. Chaos.

The sun was engulfed now, only a threaded outline visible through the haze. Our surroundings steadily darkened, tones of stained sapphire dripping from an ominous brush.

From our vantage point, we watched the cloud swallow our nearby town—the community we grew up in.

It wouldn’t be long now.

I questioned my decision to wait. Whether we were immune or not didn’t matter. The end result would be the same.

Emmy pulled back, grasping my face, eyes urgent. Her blue irises shone green in the citrine glow. “You know how much I love you, right?”

“Oh, Emmy.” My mouth fell upon hers, our kiss filled with passionate goodbyes. When we parted, I rested my chin atop her head. “I love you, too.”

I had to wait. Had to be sure of the change. I couldn’t bear it otherwise.

The wind stirred, whipping the wheat against our legs. Volatile gusts of dusty air swept up from the valley, flattening the clothes to our bodies.

“Do you hear that? Is that screaming?” I asked, straining to listen.

An explosion rocked the town below, fiery light slicing through the murk as it barrelled up the hill. We kissed once more before the amber storm crashed into us.

The wind howled, its force nearly pushing us over. I planted my feet, holding my wife tighter. But in the next moment, the world fell still. Within the heart of the cloud, it was eerily silent.

The invasive air smelled sour, thick with swirling particles that irritated my nose. Emmy coughed, gagging from the rotten odour.

Hardly any light reached us now, and I strained to see. “Are you okay, babe?”

She coughed again, groaning as she held her abdomen. “I don’t feel so well. I’m scared, Jackson. I don’t want to change—don’t want to hurt you.” She was shaking.

A ragged cough raked my throat. My hands and feet tingled, stomach rolling. It felt like something was scratching at my insides. A weight settled like lead on my chest. The cool steel of the pistol burned against my back.

Her fingers dug into my skin as she moaned in pain. An inhuman shriek ripped from her lips. With moist eyes, I watched my beautiful Emmy began to convulse. The scratching in my guts intensified—like a nest of rats trying to chew their way out. Gritting my teeth, I pulled the pistol from my waistband. My hand trembled trying to raise it.

Movements laboured, it felt as though I were running through water. What was happening to me? Wincing, I managed to press the muzzle to her temple.

Her eyes widened. I pulled the trigger.

Emmy’s body fell limp, but my sluggish arms failed to catch her. In instant retaliation, the clawing pain inside my gut scored deeper into the tender flesh there. I doubled over and the gun slipped from my grasp.

No. Reaching for it, I toppled, an unseen force forbidding my attempt to end the terror. To complete my task.

Convulsing, my joints popped. Fog seeped into my mind, dulling my senses. I heard the bones in my back crack, and with a final violent shudder, the pain was gone.

Lying there motionless, my vision slowly blurred and refocused. My body twitched.

A body I no longer controlled.

I battled to reclaim what belonged to me, but my efforts proved fruitless. A sense of insatiable hunger took hold, surrounding and permeating my fragile sense of being. Desperate, I fought to keep this thing from feeding on my wife’s still-warm body, but my pleas filtered through deaf ears. It didn’t care what I wanted.

Floating somewhere behind its eyes, I existed only as a passenger now.

Standing in one swift motion, my haggard form turned towards town. With an echoing shriek, my legs stumbled forward.

Sniffing the air, it licked my lips. 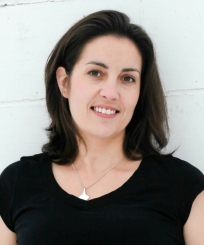 R.A. Clarke is a former police officer turned stay-at-home-mom living in Portage la Prairie, MB with her sport-aholic husband, two mischievous children, and a couple quirky dogs. She survives on sloppy toddler kisses, copious amounts of coffee, and immersing her mind in fantastical worlds of her own creation. R.A. keeps busy writing/illustrating children’s literature, and is currently working on a novel. Her short fiction has been published by Polar Borealis Magazine, Writers Weekly, The Writer’s Workout, and Sirens Call Publications.

Nina D’Arcangela is a quirky horror writer who likes to spin soul rending snippets of despair. She reads anything from splatter matter to dark matter. She's an UrbEx adventurer who suffers from unquenchable wanderlust. She loves to photograph abandoned places, bits of decay and old grave yards. Nina is a co-owner of Sirens Call Publications, a co-founder of the horror writer's group 'Pen of the Damned', and if that isn't enough, put a check mark in the box next to owner and resident nut-job of Dark Angel Photography.
View all posts by Nina D'Arcangela →
This entry was posted in Authors, Dark Fiction, flash fiction, FREE, Horror, Ladies of Horror, Writing Project and tagged author, fiction, flash fiction, Horror, Ladies of Horror, picture prompt, R.A. Clarke, Writing Project. Bookmark the permalink.