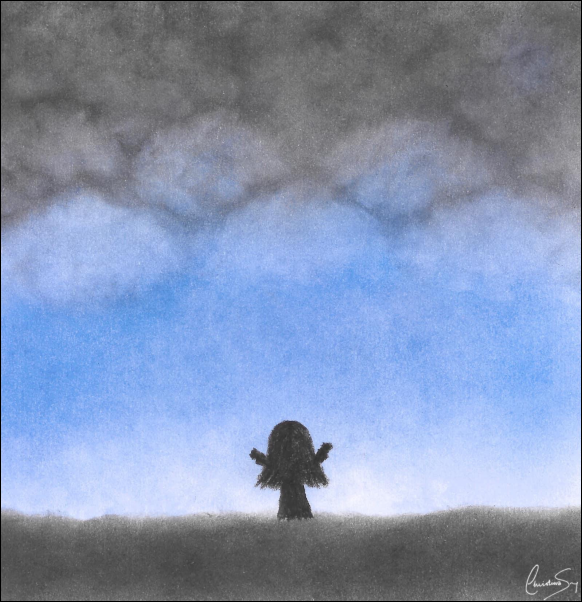 The Little Summoner
by Sonora Taylor

Jenny sighed with a forceful huff that blew a strand of hair from her face. She stared at the sky ahead of her.

She’d tried all the spells, even tried coming up with a few of her own. She could make forest animals stay still when she entered the clearing, could keep her morning tea hot and her ice cream cold.

But what she wanted most was to make it rain. Jenny loved thunderstorms, so much that her mother was amazed at her bravery. “Most five-year-olds are terrified of thunder,” she said as she smiled over her own still-steaming cup of tea.

“Not me,” Jenny declared. “It makes me feel powerful!”

But Jenny felt powerless as she watched the blue and purple sky remain without rain. She wiggled her fingers, took a breath, and pointed towards the clouds.

“Clouds above, may you rise,

“Winds and rains shall fill the sky …”

The wind picked up, and the clouds turned a darker shade of grey. Jenny’s eyes lit up, and she continued.

The wind whipped her skirt. The clouds began to swirl. Jenny gasped, grinned, and finished the spell:

“And pour your storm upon Earth’s stage!”

She threw up her arms and watched, waiting with glee for the storm to appear.

The clouds stayed still. The wind blew. No rain fell. No thunder clapped, no lightning struck.

Jenny’s arms stayed in the air. She pressed her lips, and felt her cheeks grow warm despite the chill in the air.

“You big stupid cloud! Why won’t you rain?!” She clenched her fists and shouted into the wind, “Storm, storm!”

She closed her eyes, clasped her hands, took her deepest breath yet, and in time with a sharp breeze, screamed, “STOOOOOOORM!”

A clap of thunder cut her off. She opened her eyes, and gasped at both the sight of dark clouds and the shock of cold rain against her face. “I did it!” she squealed, her voice in range with the howling wind.

Jenny turned and ran towards her house, where her mother waited in the doorway. “I made it storm!” Jenny said as her mother closed the door.

“You did! You should be very proud.”

Jenny walked into the kitchen puffed with triumph. Her mother smiled to herself, then struck her teacup with her spoon three times. “Thank you,” she said to the sky, as three lightning bolts cut across the clouds. 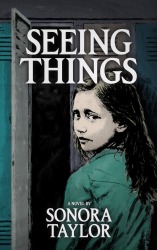 Abby Gillman has discovered that with growing up, there comes a lot of blood. But nothing prepares her for the trail of blood she sees in the hallway after class – or the ghost she finds crammed inside an abandoned locker.

No one believes Abby, of course. She’s only seeing things. As much as Abby wants to be believed, what she wants more is to know why she can suddenly see the dead. Unfortunately, they won’t tell her. In fact, none of them will speak to her. At all.

Abby leaves for her annual summer visit to her uncle’s house with tons of questions. The visit will give her answers the ghosts won’t – but she may not like what she finds out.