At the End of the Day
by Kendra Hale

The more I listen to this bullshit therapy, the more my mind grinds. Hard and heavy, I can hear the gears turning. They shriek and moan, letting out noises that alert me to the fact that they needed oil long before now. My mind feels like a machine that’s been deprived of proper maintenance for too long. Left in the dark, forgotten. Once useful… but no more. Being tossed aside would have been a kindness in comparison to rusting and eroding, disintegrating into nothing. Nothing at all.

My therapist talks a big game, the whole “You have to learn to love yourself “ speech, that sends images of that “hang-in-there kitten” poster that used to hang above my bed. But no one understands that it was never about loving myself. That was never an issue. We all learn along the way that no one’s truly capable of love, not true love. Not the unconditional love that all the Hallmark and Normon Rockwell images show.

I grew up in the rural midwest, an area where farming thrived and the fields were always rotated for different crops. I was taught that the rotation helped to keep the ground fertile, to stop it from becoming useless, without nutrients. Each summer it would be something different; short crops of soya beans one year, but then the next the corn would rise, high and healthy.

Looking back, the corn years were my favorites. It was fuel corn, so there was no reason to sneak into the fields at night to steal the cobs, as they were inedible. But once the fall came, and the winds brought a light chill, these stalks would lose their rich green, almost as if their life was sucked out of them. They would slowly transition to tans and browns. It made them perfect for use as cheap Halloween decorations; you just had to collect the stalks, and arrange them around the outside of the house.

Halloween was always one of my favorite holidays. It was normal for everyone to hide their faces and identities, with masks and costumes, instead of just being alone, which was my mask on a daily basis. On Halloween everyone was in on the game. It made it the norm, instead of it being seen as weird. It was the one time of the year where I felt a part of something, which was rare for me.

When I turned fourteen, the fields that I had watched flourish over the years stopped taking the seeds. The lands became barren, they refused to grow crops. I watched as the farmer who owned the land tried over the months to get the fields to grow, bringing in all manner of machinery to try to make the land fertile again.

I would sit outside and watch as the workers tried in vain. My Father would tell me that the farmer would be smart to leave it for a year and let the ground rest, that he was killing it with all the constant planting. My Father wasn’t a good man, but he was a smart one. All the drinking and drugs he’d done to numb his old wounds hadn’t prepared him, or given him the patience necessary for raising a child.

My Mother had been killed by a drunk driver when I was seven, and my Dad  never recovered. I lost what was left of my childhood on the day I watched them lower her into the ground, and cover her with dirt. The small pitter patter of the light earth were harbingers to the thunder of the thud of the shovels. It struck me that day that this would be where we all ended up in the end, hidden in the dark. Forgotten.  But some of us know that feeling in our everyday lives, even though we’re still alive and kicking. It’s ingrained in our very being.

To the outside world I probably seemed a happy child. All was “normal”. But it’s astounding how something that looks normal, can actually be twisted and dark, on every level. Like I said, my Father wasn’t a good man, and the times where I got to actually be a child were gone after my Mother’s death. The times I was allowed outside were sparing, but were occasionally allowed, with the sole intent to show more of that normalcy. To the neighbors or those driving by or visiting my Father, I probably looked like nothing more than a kid outside, enjoying a nice day.

In truth though, Father only sent me out so I wouldn’t see what he was doing behind . You see, my Father’s mind had cracked, similarly to mine, when my Mother was killed. His center was gone and he was unable to cope. His anger was all encompassing, as was his pain. I was frequently a target of that pain.

It was my fault for looking like her, I guess.  Long, honey blonde hair, and light green eyes. That was what he thought, and that hatred had spewed over into his life, threatening to drown him.

When mom was younger, he’d told her that all he was doing in life was trying to find his breath, but barely staying above water.

I hadn’t understood at the time why the “mermaids” he played with never spoke to me. They just stared from the large tank in the basement at me, their eyes wide and their mouth caught in this continuous O shape. They almost looked scared of me, and all I wanted was to comfort their fears. The way their golden hair flowed in the water and caught the florescent lights was mesmerizing… almost magical.

It hadn’t been until I was older that I realized what my Father was doing when he was “breathing”. The first time he asked for my help, I was seventeen years old. I remember the dirt from the field on my hand, the dry scratchy texture, the way it stood out so starkly against my own flesh. I knew it was wrong in an instant, but my mind couldn’t get around the fact that my Father was doing these things… and now, so was I.

Everything changed after that moment, but given my Father’s standing in the community and his careful nature, no one ever found out. By the time I was twenty two I’d lost count of the girls he’d brought in. The days of calling them mermaids were long gone by then, with no door left open for a discussion. He shut me out completely at the end. Not that I even cared any more at that point, I’d moved on to a local college and was studying to be a criminal profiler.

After all the years of learning from the best, and successfully adding my father’s victims to the field that never bore crops again… who else could be better to analyze the minds of those with ghosts in their machines? 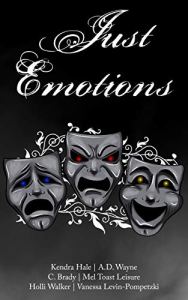 Nina D’Arcangela is a quirky horror writer who likes to spin soul rending snippets of despair. She reads anything from splatter matter to dark matter. She's an UrbEx adventurer who suffers from unquenchable wanderlust. She loves to photograph abandoned places, bits of decay and old grave yards. Nina is a co-owner of Sirens Call Publications, a co-founder of the horror writer's group 'Pen of the Damned', founder and administrator of the Ladies of Horror Picture-prompt Monthly Writing Challenge, and if that isn't enough, put a check mark in the box next to owner and resident nut-job of Dark Angel Photography.
View all posts by Nina D'Arcangela →
This entry was posted in Authors, Dark Fiction, flash fiction, FREE, Horror, Ladies of Horror, Writing Project and tagged author, fiction, flash fiction, Horror, Kendra Hale, Ladies of Horror, picture prompt, Writing Project. Bookmark the permalink.