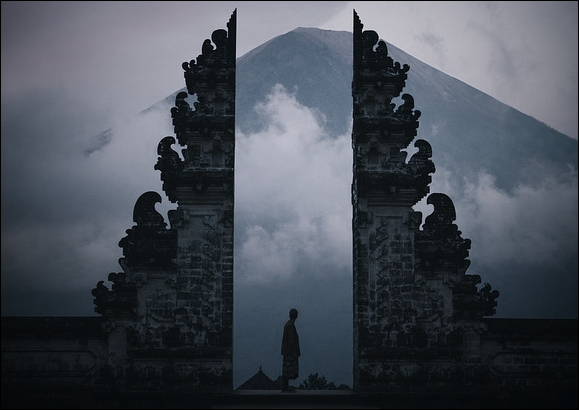 I met her in the midnight twilit darkness of a golden autumn moonrise. The fireflies lit up the trees near the river in which she waded like old oil lamps, showing her effervescent form amongst the woods like Aphrodite in silver, but that was just the glow of her skin. She was madness in the starlight. Her graying white gown, floating softly in the gentle waters, did not diminish her shine. Raven hair, eyes of black intrigue, and a voice that had called me here, silently. Her back was to me, but I knew she was more than aware of my presence. She kept her distance until the moon reached its apex in the sky, then disappeared from the water, reappearing around a tree to kiss me, then vanishing into the dust motes and phosphenes of a quanerenian moonbeam.

We met in those woods near the babbling river without words or expectations from dusk to the choleric half-light of pre-dawn moonglow until winter had breathed its last frost. With spring, she would be gone. I didn’t know how I knew that, but I did. Like how I knew her name when she never spoke a word. Lilia. It fit her, somehow. Like a flower, slightly damaged, in a Monet hanging in a dusty corridor somewhere, alone and unappreciated, despite its beauty. She made fate flow with pale fingers, finding solace in the waters. Her leaving was but a metamorphosis, she told me in my dreams. That was the end.

Two years later, I still dreamed of her. Still thought of her. Who and what she was, I didn’t care. I took evening walks along the pier that went out past the breakers, and it shored my soul. For what could she have been but a siren or a nymph? Something of seas and tides and moonlight. Every eve I walked the weathered boards, leaving at moonrise to pace our same path through the woods to the spring-fed waters.

It was a crisp winter dusk in a light snow on the pier when I saw her again. She didn’t look like herself, no, not this black skeletal form tied together with remnants of sinew and dripping ichor, her stringy hair trailing along her hip bones as she threw her head back and surveyed the sky with those same flat black eyes. She walked along the railing in the snow fog, not even looking at her feet. Yes, she was different, but not different enough to steal away my love for her. Her bones were beautiful; ebony, cracked in places—she must have been very old, and certainly she was very wise. The sinew and strips of muscle showed her strength—they’d lasted so long, and certainly she was a living being with these things. Had I not the same? And the ichor, the pitch-colored, viscous slime that poured from somewhere inside—what was it but a different kind of blood? The color did not bother me.

We walked back into the woods as it was getting dark. She entered the water, the usually roiling surface now still as glass, and then went under. She lay amongst a bed of river rocks, her skeleton’s dark suppuration slowly merging with the colors of the stones in glimmers of coruscation. She reached out a bony, fleshless hand to me. We would be warm together beneath the cold waters. I stepped in up to my knees, reaching out to take her hand. Charles, spoke the chill night wind, and she stopped, turned her head, and smiled at me for the first time, ragged, desiccated lips revealing teeth like razor blades, filed to points. I’d always known her smile would be special.

Nina D’Arcangela is a quirky horror writer who likes to spin soul rending snippets of despair. She reads anything from splatter matter to dark matter. She's an UrbEx adventurer who suffers from unquenchable wanderlust. She loves to photograph abandoned places, bits of decay and old grave yards. Nina is a co-owner of Sirens Call Publications, a co-founder of the horror writer's group 'Pen of the Damned', founder and administrator of the Ladies of Horror Picture-prompt Monthly Writing Challenge, and if that isn't enough, put a check mark in the box next to owner and resident nut-job of Dark Angel Photography.
View all posts by Nina D'Arcangela →
This entry was posted in Authors, Dark Fiction, flash fiction, FREE, Horror, Ladies of Horror, Writing Project and tagged Anna Davis, author, fiction, flash fiction, Horror, Ladies of Horror, picture prompt, Writing Project. Bookmark the permalink.