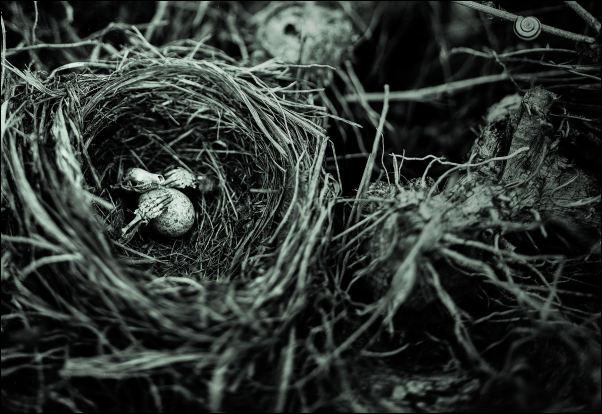 The brightest star faded, falling from the sky, as the planetary spinning dwindled to a shattering halt; vibrant colors of the land lost to a withered world. Animals, people, plants — all wasted away to be forgotten by time. The seas dried up, and the lining of the earth cracked. Small rocks trickled through eroded slivers in the ground, never to ‘plunk’ on their bottomless drop. Astronomical devastation scrubbed the global guise.

Upon its face, tiny hands held lovingly to a speckled egg. A creature, unfamiliar with the unborn being deep within, spent its last remaining moments clutching the shell as if to say, ‘You are not alone.’

The blood that had seeped through the brittle nest did nothing to quell the parched ground beneath. At last, final breaths expelled into the forever blackened sky. Time was unkind as it wore down more lands, more lives. Flesh of the minuscule monster gave way to muscle then bone as its carcass caved to the harsh atmosphere.

Under Her Black Wings:
2020 Women of Horror Anthology

– A glamorous actress whose very flesh is reanimated by a beloved Hollywood icon
– A Boy Scout Troup encounters a frightening mythological creature in an American forest
– A lonely woman finds a home among a group of lost-and-found souls, all cared for by a tentacled sea-creature called Mother
– A Faceless Woman attacks like a virus and takes on the identities of her victims
– A post-apocalyptic battle for survival rages between human and insect
– A Shadow Woman leads the spirits of the murdered to take revenge in the desert

These are just some of the stories nineteen women came up with when tasked with creating their own Women Monsters. Step inside and experience tales of bloodsucking entities in the jungles of Southeast Asia, Cuban river goddesses, an Aztec bruja, werewolves, mermaids, soul-stealers, obsessive lovers, furious spurned wives, bloody murder in Gothic manors and on Southern plantations… and so much more…

With Foreword by Brandon Scott (Author of Vodou and Sleight, Devil Dog Press)