I was a lowly accountant and she was a shy young thing. A head of unruly red curls, and a keen attention to anything I said. She stole my heart! How joyful I was when she agreed to marry me. I brought my bride home to a modest cottage outside of the city. It was in need of paint and plumbing repairs., and there were sugar ants in the kitchen. She appeared delighted, and I was grateful. Unfortunately, I had no time to devote to repairs, and we simply couldn’t afford a full renovation.

Within two weeks, she had repainted it inside and out. The kitchen was spotless and the bathroom sparkled like new.  Her pot roasts and desserts were divine. She never complained about anything. In the space of two years, I rose to be manager of the firm.

One evening I came home a bit early and overheard her chanting. The kitchen smelled of chocolate. On the sideboard lay a tree limb and a bowl of lint. Scattered around were golf ball size round candies. They looked like Ferraro Rocher’s, my favorite. Seeing me, she stopped. “Oh Malcolm, you’re home!”

“What’s this?” I laughed. “Bark chocolate? She dimpled. “It’s just a little something extra for dessert, darling. Come now, let me pour you a nice cup of tea.”

She fussed over me, removing coat and tie, pushing me gently down in a chair. The tea was delicious, but I couldn’t figure where it came from. The only liquid out in the kitchen was a pitcher of water. Anyway, those chocolate balls were to die for.

My form changed from human to gargoyle. At her bidding, I hide in the rafters of old churches and frighten the elderly to death. I’m not alone, there’s a whole bunch of us former husbands of hers for company. Fact: if your bride never complains, there’s something scary-wrong with her. 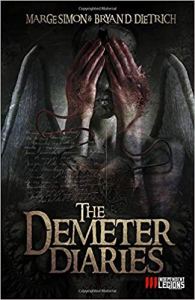