For this book, we collected stories of monsters doing epic battle with other monsters! The beasts could be classical by design with a unique twist, or they could be spawned straight from the author’s imagination. The only rule: there must be a clear-cut winner at the end of each story; one of the creatures had to die!

Some of the stories in this collection pit a single monster against another, while others are all-out gang warfare. Some are campy, some serious, but all a fight for the ages!

It’s time to get your game face on for twelve tales worthy of the title Monster Brawl!

Click here to grab your free copy on Amazon! —>>> 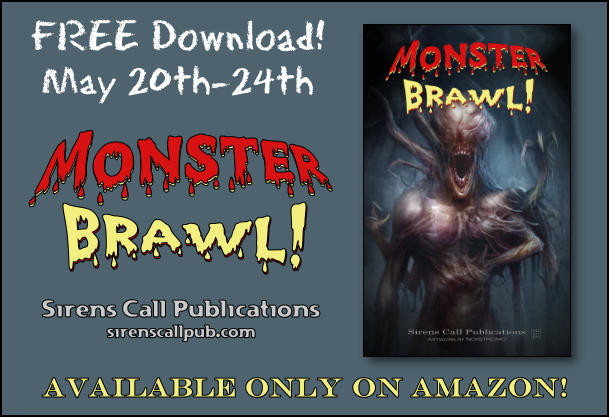 Click here to grab your free copy on Amazon! —>>>

Nina D’Arcangela is a quirky horror writer who likes to spin soul rending snippets of despair. She reads anything from splatter matter to dark matter. She's an UrbEx adventurer who suffers from unquenchable wanderlust. She loves to photograph abandoned places, bits of decay and old grave yards. Nina is a co-owner of Sirens Call Publications, a co-founder of the horror writer's group 'Pen of the Damned', and if that isn't enough, put a check mark in the box next to owner and resident nut-job of Dark Angel Photography.
View all posts by Nina D'Arcangela →
This entry was posted in Amazon, Anthology, Dark Fiction, FREE, Free Download, Horror, Monster Brawl, Sirens Call Publications and tagged Anthology, dark fiction, Fight to the death, free, Free download, Horror, Monster, Monster Brawl, short stories, Sirens Call Publications. Bookmark the permalink.