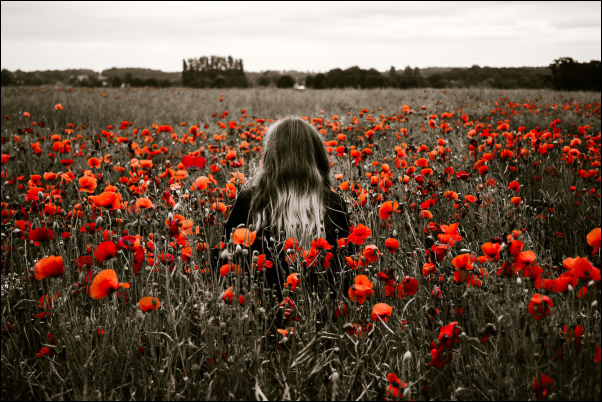 Bones into Blood
by Sonora Taylor

A woman walked into a field
With flowers white as bone.
She knelt into the grasses and
Began to dig alone.

The only one beside her was
The body drained of blood,
Blood that sat in mason jars
Within her cozy home.

As she dug, her bones grew weak,
Her skin a clammy cold.
She wiped her brow, then started when
She saw her fingers coiled

Like the bones of that poor body
Lying at her feet.
Her feet, now shriveled like her hands!
She let out one last scream

As her blood seeped into the dirt
And disappeared below.
She glanced and saw the flowers were
No longer white as bone.

They took her color, took her blood,
Then took her heart’s last beat.
She fell into the grasses near
The body at her feet.

Is it a knock on the door, or a gust of wind? A trick of the light, or someone who’ll see what you’ve done?

“Little Paranoias: Stories” features twenty tales of the little things that drive our deepest fears. It tells the stories of terror and sorrow, lust at the end of the world and death as an unwanted second chance. It dives into the darkest corners of the minds of men, women, and children. It wanders into the forest and touches every corner of the capital. Everyone has something to fear — but after all, it’s those little paranoias that drive our day-to-day.