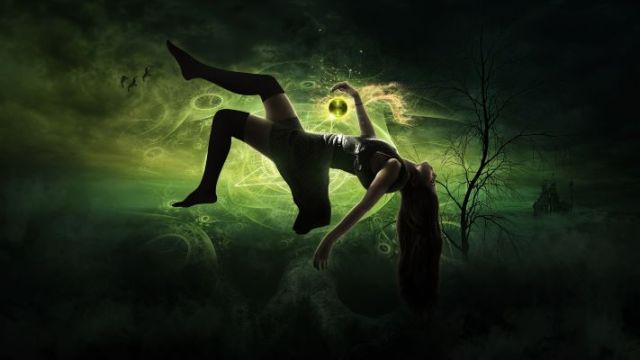 The traveler watched with closed eyes—seeing, seeking—but still, nothing made any more sense than it had before. She’d spent so much of her life searching for it, but the answer had always hovered just beyond her reach: She’d searched for the light with her eyes, allowing the darkness to blind her instead. She’d looked outside herself, but in the process, she’d neglecting one vital piece in her pursuit. How many souls had slipped into that same abyss before her, only never to return?

How many times had she entertained its false promises, almost lost forever to a lie? Would the truth she sought always be buried under so much baggage?

Then she heard the song—one about dichotomy and balance and goodness and evil. Its echoes told of a world divided, a story about love and hate, one with infinite players, all struggling and fighting for their right to cling to a brief moment of it all, a speck of existence to call their own, however fleeting and small.

She saw that it had happened before, every moment of it, and it would happen again. It was the perception, the moment, that made it real. The song remained unchanged. It played without pause, eternal. It was the spark that brought her into being, and it was the darkness that would swallow her in the end.

She saw both, falling outside of time and space for one infinite second.

One defining moment that would change everything.

This four-part collection includes the first three novellas to the dark, dramatic horror series, Jane the Hippie Vampire, as well as an exclusive novelette:

Love Beads: Jane crosses paths with a middle-aged man who’s encountered her kind before–but he seems happy just to have the company. Of course, appearances can be deceiving, and his secret might just prove to be the end of her.

Flashbacks: Jane must face demons from her past when she encounters a long-lost friend and a homeless Vietnam veteran with lingering demons of his own.

Hair: Jane goes south for the winter, hoping to find reprieve in the forests of the Blue Ridge Mountains. A supernatural stalker of the shape-shifting variety has different plans, however. Will her new-found ally–a park ranger with a painful secret–be enough to help her avoid a fate worse than undeath?

Flower Power: Jane teams up with an astral traveler in order to banish a dreamwalker from her past–and in the process, she must confront her greatest nightmare.

About the series: Jane has had one hell of a time ever since she happened upon the wrong guy during the Summer of Love, but she’s taken it all in stride. Wandering from town to town, she seeks out the needy and the broken in hopes of breaking the curse that’s left her bloodthirsty and forever seventeen.

Nina D’Arcangela is a quirky horror writer who likes to spin soul rending snippets of despair. She reads anything from splatter matter to dark matter. She's an UrbEx adventurer who suffers from unquenchable wanderlust. She loves to photograph abandoned places, bits of decay and old grave yards. Nina is a co-owner of Sirens Call Publications, a co-founder of the horror writer's group 'Pen of the Damned', and if that isn't enough, put a check mark in the box next to owner and resident nut-job of Dark Angel Photography.
View all posts by Nina D'Arcangela →
This entry was posted in Authors, Dark Fiction, flash fiction, FREE, Horror, Ladies of Horror, Women in Horror Month, Writing Project and tagged author, fiction, flash fiction, Horror, Ladies of Horror, Lisa Lane, picture prompt, WiHM, Women in Horror, Women in Horror Month, Writing Project. Bookmark the permalink.