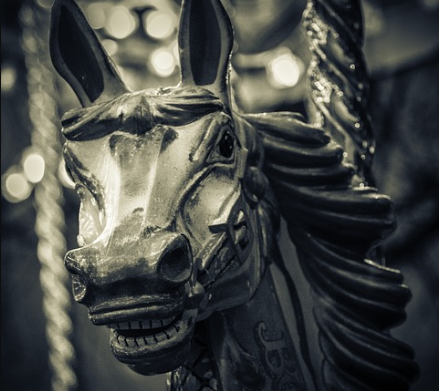 For as long as the Gods and Mortals have existed, I ride.

I am Róta. I am Valkyrie.

Long ago there were times of peace between the wars waged by Gods and men. A time when I my sisters and I would share in mead and tales of those we called home to Valhalla. We took lovers from both the heavens and the earth. We were strength, beauty, power – a sight to behold bearing down upon the battlefields claiming the final fates of men and Gods alike.

It is barely a memory now. My sisters are gone. Picked off like the ravens that flew in with us. As for the Gods, they are no more than words upon old pages, and in new songs. But the men… the men continue to wage war, and so I ride.

My throat is parched from a millennia of battle cries. My time for passion and revelry is over – dried to dust – an unslakable thirst is all that remains.

The blood spills endlessly across the green of lush fields, and the amber sands of parched earth. As the bodies fall, I gallop hard through the screaming masses, choosing from the thousands who shall stay to fight again, and who shall be taken home.

I pray that eventually I too will be called home for good, but until that glorious moment I ride alone, casting my judgement on who shall die this day, and every day forward.

Nina D’Arcangela is a quirky horror writer who likes to spin soul rending snippets of despair. She reads anything from splatter matter to dark matter. She's an UrbEx adventurer who suffers from unquenchable wanderlust. She loves to photograph abandoned places, bits of decay and old grave yards. Nina is a co-owner of Sirens Call Publications, a co-founder of the horror writer's group 'Pen of the Damned', founder and administrator of the Ladies of Horror Picture-prompt Monthly Writing Challenge, and if that isn't enough, put a check mark in the box next to owner and resident nut-job of Dark Angel Photography.
View all posts by Nina D'Arcangela →
This entry was posted in Authors, Dark Fiction, flash fiction, FREE, Horror, Ladies of Horror, Writing Project and tagged author, Bailey Hunter, fiction, flash fiction, Horror, Ladies of Horror, picture prompt, Writing Project. Bookmark the permalink.