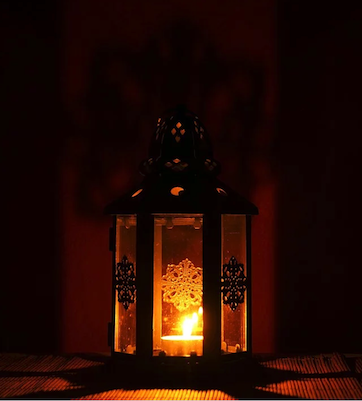 Leave a Light On
by Bailey Hunter

“You should know. It’s tradition,” my sister Elise muttered under her breath.

“I can’t believe you forgot,” my brother Jonah said, scowling at me.

My other brother Davis just stared right through me with cold eyes that reflected the lights off the tree.

“It’s not my fault,” I hiss back. “What were you thinking giving the responsibility to me anyway?”

Seriously though, how was I to know that not putting the candle lantern in the window for our ancestors this Christmas was going to be such a big deal?  I mean, it’s not like I forgot on purpose or anything. It’s the 21st century for chrissakes. Who does that kind of thing anymore, anyway?

Apparently WE do.  Or at least we’re supposed to. Meaning I was supposed to…

I did eventually light the candle, but it was too little, too late. Over a half dozen long deceased relatives have broken into the house. They took out mom and dad first. Davis bit it next trying to save them while screaming at me for being an idiot, until they ripped out his throat, that is.  The house is decorated in blood splatter. The hearth is draped in a shiny, slick bough of their intestines.

The worst part— aside from the whole ancestors descending upon us in a mindless killing horde thing— is that now my mom, dad, and my brother Davis will become one of them, and they’re inside the house.  I really don’t want to kill them twice. I don’t even know if we can kill them once they turn to be honest.

My remaining siblings are really pissed off at me, but we’re working together.  It helps that they can’t yell at me right now without giving away our position. All we gotta do is make it to Christmas morning and not be torn open like the presents under the tree. If we make it, it’s going to be the best and the worst Christmas ever.

Other families may not like having extended family over for the holiday, but they’ve got nothing on us.