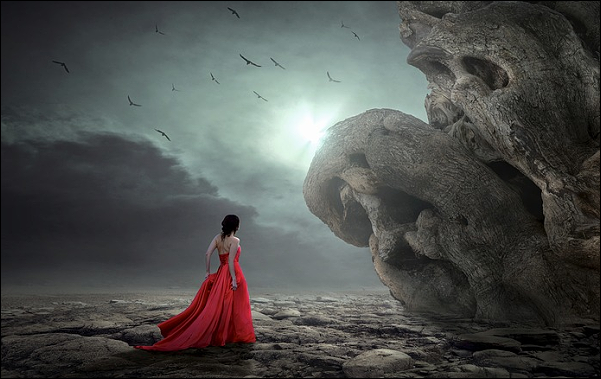 Alondra DeCourval stood alone on the plain of frozen lava. In the distance, the surf exploded against the island’s shoreline, but here the air above the lava field was as arid and still as a desert.

She gazed up at the rock formations towering ahead of her. It was all too easy to see their collections of shallow caves as empty eye sockets and yawning, toothless mouths. The faces looked as if they had been frozen in mid-scream.

What happened here? Alondra stepped forward to place her palm against what might have been a cheek. She closed her green eyes, settled her breathing, and listened.

Overhead the gulls wheeled and screeched, making it difficult to concentrate. Alondra resettled her feet, shifted her shoulders, but didn’t take her hand from the rock.

At the edge of consciousness, she heard something. It was subtle and slow, a shadow almost without sound, but the gist of it resolved into an impression of pleading. She didn’t understand the words — they were in some language she hadn’t heard before — but trapped within the rock was a consciousness or two. And they begged for death.

Alondra took a step backward. She wasn’t as familiar with Hawaiian lore as she knew she should be, but the one thing she understood quite clearly was that no one messed with the goddess Pele.

Pele lived in the volcanoes at the heart of each island. She made lava flow or stop at her whim. If you stole her rocks or didn’t make the correct offerings or disrespected her in any way, you were doomed.

Alondra gazed up at the rocky faces and wondered how they had angered the fire goddess.

It was heartbreaking to stand before them, to understand they wanted her help — and to realize that she was powerless. The goddess had imprisoned them for a reason. She’d kept them alive for a reason. Alondra couldn’t trust the prisoners to tell her honestly why that was. And while she had often risked her life to help some poor creature who requested her help, here in Pele’s domain — on an island surrounded by the savage Pacific Ocean — Alondra risked many more lives than her own. If it suited Pele, she could erupt the volcanoes, explode the island, and leave a wreck behind like Santorini. Or worse, like Atlantis.

Alondra knelt at the foot of the rock face. From her messenger bag she took the bottle of gin, a vanilla-scented candle, and a box of matches, and set them on the cold lava. She removed the flower that had been pinned into her auburn hair and rolled its stem between her palms. As the flower twirled, it released its scent. Then she placed the tuberose blossom reverently on the lava.

Before she could reach for the matches, the candle wick took flame all of its own.

“Thank you, Madame,” Alondra said. “I have a favor to ask. Not for myself, but for these creatures trapped here.”

The ground beneath her knees grumbled, as if a giant below her turned over under its blanket of stone. The gin bottle toppled over. Although Alondra hadn’t even loosened its cap, liquor flowed out onto the parched rock.

“If it pleases you to release them, thank you,” Alondra said.

There came another groaning sound: rock grinding against rock. This sound came from over her head. Alondra scrambled back from the cliff face, but stones didn’t crumble or fall. Instead, the depressions she had taken for empty eye sockets had narrowed. The caves like toothless mouths had twisted into cruel, anticipatory smiles.

Alondra unhooked the matched pair of peridots swinging from her earlobes. She stretched down and placed the earrings beside the burning candle and the tuberose flower. “Madame, if it suits you, leave them imprisoned where they can do no harm.”

Alondra heard a sound like gnashing teeth, but no other response. She turned and walked back across the lava field, watching her feet so she wouldn’t twist an ankle. She never saw the old woman who came behind her to slip the earrings into her own earlobes and tuck the flower into her own steam-white hair. 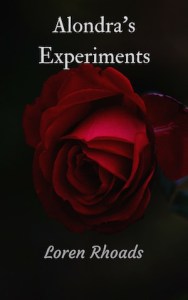 Alondra DeCourval travels from San Francisco to Prague to Olso, encountering magical creatures and searching for the limits she will go to for love.

Nina D’Arcangela is a quirky horror writer who likes to spin soul rending snippets of despair. She reads anything from splatter matter to dark matter. She's an UrbEx adventurer who suffers from unquenchable wanderlust. She loves to photograph abandoned places, bits of decay and old graveyards. Nina is co-owner of Sirens Call Publications, co-founder of the horror writer's group 'Pen of the Damned', and if that isn't enough, put a check mark in the box next to owner and resident nut-job of Dark Angel Photography.
View all posts by Nina D'Arcangela →
This entry was posted in Authors, Dark Fiction, flash fiction, FREE, Horror, Ladies of Horror and tagged author, fiction, flash fiction, Horror, Ladies of Horror, Loren Rhoads, picture prompt, Writing Project. Bookmark the permalink.