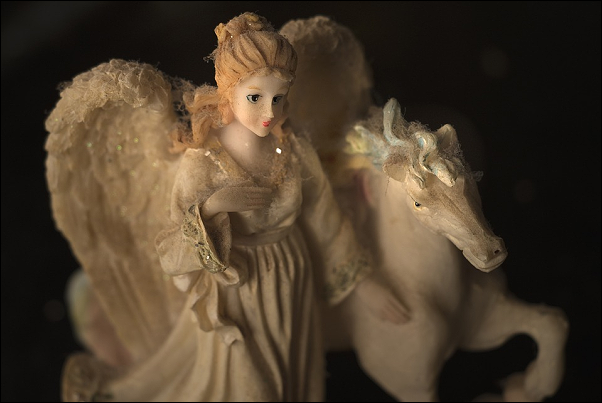 All grandma left me when she died was a tacky figurine of an angel and horse. She always called it her tooth fairy. Someone handed it to me after the funeral, murmuring words about her being a fine woman with an invite to cry on their shoulder. I looked at the shabby, porcelain face of the figurine and remembered.

“No, is a fairy for collecting teeth,” she’d insist. “Angels stay locked in Heaven. Fairies do us favors.” Until the end she insisted it was a tooth fairy.

Now I was stuck with it, but who knows? Maybe it did work. Kids went missing every year from our town, in spite of everyone knowing everyone. The sheriff was convinced it was out-of-towner drifting through and was hard on strangers. Too hard. Hitchikers vanished too, but that wasn’t important. We all knew the sheriff acted with good intentions, even if it never helped. My friends all vanished just the same. Only I was never touched.

I went back to the house alone. Our congregation had already come in and boxed a bunch of things up for me. They assumed I wouldn’t want to live here alone. That’s one of the bad things about a small town—everyone knew everyone and thought they knew everyone’s business.

I set the figurine on a stack of boxes, and then tripped over an empty tape roll left on the floor. The box tower toppled and the angel and horse crashed to the floor. Good, I thought. Now I have an excuse to be rid of the ugly thing.

I grabbed the broom and pushed boxes aside to clean up. Among the shards of statuary were tiny, rolled up bits of paper. I leaned the broom against the wall, knelt down and picked one up. Something was inside. I unrolled the yellowed paper and a milk tooth popped out. My grandmother’s spidery scrawl ran the length of the paper.

Joseph Madden, for pushing my girl off the swing.

I remembered that day. Joe and I had played tag all afternoon. The winner of the last game got first dibs on the tire swing and the loser had to push. I won the swing but we argued when I wouldn’t give Joe a turn. He had finally pushed me off. He made me cry, then he disappeared.

Shaking, I unrolled more scraps of paper. Teeth littered the floor among the broken glass.

Anabelle Smith for making fun of my girl’s pants.

Darwin Keene for not bringing a birthday gift.

All my friends. I didn’t want to understand what I was looking at, but I did. So many things made sense now. Grandma’s rubbish dump—a deep pit in the middle of our field where she burned garbage. I was never allowed to come with her.

“My pretty girl shouldn’t be around burning trash,” she’d say. “The stink will taint you.”

I stopped unwrapping the tiny teeth. I knew who they all were. I couldn’t read any more because my eyes were blind with tears. The front door swung open and I looked up to see the sheriff entering the house hesitantly.

“I was just checking to make sure you’re okay here by your lonesome,” he said.

Surrounded by all that remained of every friend I’d ever had, I felt the most lonesome I’d ever been. I looked up at the sheriff, tears streaming down my face and scooped up a handful of teeth for him to see.

He let me drop my handful of frenemies into his palm. He read some of the papers, looked at the teeth and nodded. Bending over, he helped me up, dusting away the shattered past that clung to me.

“I’m sorry to say, it makes sense. And I’m sorry I never could see it until now,” he said. “She was just such a sweet old girl. And I just thought it had to be an out-of-towner…” I was shaking like a leaf. Memories raced through my mind—every petty argument, every jealousy I ever had was a death. I collapsed.

The sheriff didn’t say another word. He scooped me up in his arms like a child and carried me out of the house. He closed the door behind him. For once, I was glad everyone thought they knew my business. This time they were right.

Nina D’Arcangela is a quirky horror writer who likes to spin soul rending snippets of despair. She reads anything from splatter matter to dark matter. She's an UrbEx adventurer who suffers from unquenchable wanderlust. She loves to photograph abandoned places, bits of decay and old grave yards. Nina is a co-owner of Sirens Call Publications, a co-founder of the horror writer's group 'Pen of the Damned', founder and administrator of the Ladies of Horror Picture-prompt Monthly Writing Challenge, and if that isn't enough, put a check mark in the box next to owner and resident nut-job of Dark Angel Photography.
View all posts by Nina D'Arcangela →
This entry was posted in Authors, Dark Fiction, flash fiction, FREE, Horror, Ladies of Horror, Writing Project and tagged Angela Yuriko Smith, author, fiction, flash fiction, Horror, Ladies of Horror, picture prompt, Writing Project. Bookmark the permalink.