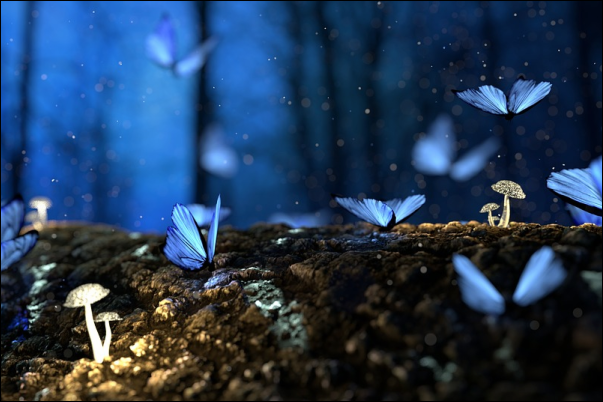 Under the earth, she waited.

She sensed them moving above her, the precursors to her arrival.

First of all, the fungi. Death Cap, they called it. Well, they got that bit right.

Then the butterflies. What could be more harmless? No sting, no bite. Just pure loveliness.

If only they knew. Poor fools.

As gossamer wings tickled her, she smiled. The ground above her shifted. Spores from the mushrooms were carried on the slender legs of the butterflies. Butterfly and spore whirled and settled, whirled and settled. The fungi thrived. The butterflies died, their task completed. Nourished by these creatures that foretold her coming, she grew strong.

She had always been able to defend herself. Sheets of ice. Calling the asteroids from the sky. Boiling the seas. Choking all with dust and ash. Whatever was necessary. To rid herself of any that became a plague. Too strong, too clever – eventually, they all outlived their usefulness. It was time to start again, once more.

How to do it, this time? Strip their skin with liquid fire? Give the small, crawling creatures a plague to carry, one not detected until too late? No, she decided, this time it wasn’t enough. The damage they had wrought was far, far more than that of any who had walked here before. They deserved…something else.

Under the earth, she shuddered.

Limbs not moved for millennia stretched and flexed. Eyes flickered and opened. A voice not heard since the beginning of the world screamed its fury and anguish that the world must end.

The men who witnessed it first and lived – for a short time, at least – said that it was as though everything around them was alive, and angry. That a huge, terrible, beautiful creature had risen out of the ground, her skin silver, her eyes blue. These men spent their last days in various institutions, without the benefit of modern communications, so they didn’t see or hear the further reports. When the seas finally covered the land, they were already dead, their carers long since gone in an attempt to escape. They never found out that, by the end, everyone had seen her.

She had made sure of that. Floating peacefully in the water that now covered all, she reflected on the many names she had heard herself called. Some thought she was a demon, others an angel. Some had refused to call her anything, insisting right up to the end that she was a mass hallucination, or a scientific phenomenon. But she particularly liked one name – in fact, one phrase used about her. As she mused on what she and her Earth would do next, she spoke it aloud.

Nina D’Arcangela is a quirky horror writer who likes to spin soul rending snippets of despair. She reads anything from splatter matter to dark matter. She's an UrbEx adventurer who suffers from unquenchable wanderlust. She loves to photograph abandoned places, bits of decay and old grave yards. Nina is a co-owner of Sirens Call Publications, a co-founder of the horror writer's group 'Pen of the Damned', founder and administrator of the Ladies of Horror Picture-prompt Monthly Writing Challenge, and if that isn't enough, put a check mark in the box next to owner and resident nut-job of Dark Angel Photography.
View all posts by Nina D'Arcangela →
This entry was posted in Authors, Dark Fiction, flash fiction, FREE, Horror, Ladies of Horror, Writing Project and tagged author, fiction, flash fiction, Horror, Karen Soutar, Ladies of Horror, picture prompt, Writing Project. Bookmark the permalink.