Laura Allen stared into Clara’s cold, dead eyes, covered the lower half of her mouth with one hand, and smiled. Her sister appeared pale beneath the harsh morgue lighting, her blue eyes dull and ringed with shadow. Lustrous blonde hair had grown lank beneath the touch of death. She had never looked worse in her life.

Laura’s smile broadened and she squeezed her eyes shut, feigning grief. For the first time in her life, she was the only one. No one rivaled her in beauty. Not anymore.

Behind her eyelids, Laura imagined Clara’s transition from beauty to rotting corpse. She saw her sister’s eyes sink back into her skull, saw the nose fall away, saw the skin grow dry as it stretched over bone. She stifled a chuckle, transforming it into a false sob.

Damien wrapped an arm about her and she fell against his shoulder, shuddering as though wracked with tears. His right hand clutched her arm, the fingers mottled with blue, red, and yellow paint.

“I c-can’t believe it,” she whispered. “How could she take her own life?”

Damien’s eyes filled to the brim and his lower lip trembled. He shook his head. “I’m…I’m in shock,” he replied.

His shock was nothing compared to Clara’s. She’d regarded Laura with wide and astonished eyes when Laura pushed her off the pier and into space.

Laura nodded to the morgue attendant and the young man covered Clara’s body with a sheet. He escorted Damien and Laura from the room.

When they had finished the paperwork, Damien led her from deathly silence back into the bustle of the busy street outside. The noise of the city filled her.

“Let’s go to the gallery,” she said, grasping hold of Damien’s arm. “I want to see the exhibit.”

“Yes…please. I want to see her again. See her the way she was.”

They linked arms and headed up the sidewalk. Moments later, they passed through portals of glass, their feet treading lightly over marble floors.

Damien’s paintings hung on the white walls beneath ambient light. Each depicted a beauty with blue eyes and blonde, flowing hair.

“You know,” he said. “I can’t tell which is you and which is her anymore.”

“You’re not alone. Not even our mother could tell us apart,” Laura said beneath her breath. She pointed at the painting called, “Woman in the Water,” one of Damien’s best.

“This is me,” she said. A woman, her hand fisted beneath her chin, knelt in the water, lush foliage and mountain rock at her back. A wreath of flowers crowned her head while the setting sun lit her world.

“I remember the day you painted it. It was the first. I filled in for Clara when she was sick. You didn’t know.”

She leaned back against him, felt his arms encircle her.

When she opened her eyes, the painting changed.

Gone were her blue eyes. In their stead were vacant sockets. Her nose melted away and the skin of her face grew tight. The wreath of flowers became a demonic pair of horns.

She followed his gaze.

Some paintings had remained the same, but others reflected the same grotesque face as “Woman in the Water.”

She had posed for all of them.

A black fog gathered at the corner of her eyes. She turned to Damien, his face a mask of wordless horror.

He backed away from her, tripping over his own feet in an effort to get away. And, then he vanished behind a curtain of black.

A long way off, someone screamed. 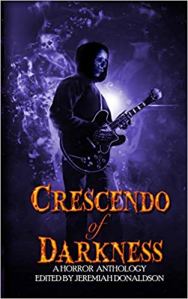 Music has the power to soothe the soul, drive people to obsession, and soundtrack evil plots. Is music the instigator of madness, or the key that unhinges the psychosis within? From guitar lessons in a graveyard and a baby allergic to music, to an infectious homicidal demo and melancholy tunes in a haunted lighthouse, Crescendo of Darkness will quench your thirst for horrifying audio fiction. HorrorAddicts.net is proud to present fourteen tales of murderous music, demonic performers, and cursed audiophiles.

Nina D’Arcangela is a quirky horror writer who likes to spin soul rending snippets of despair. She reads anything from splatter matter to dark matter. She's an UrbEx adventurer who suffers from unquenchable wanderlust. She loves to photograph abandoned places, bits of decay and old grave yards. Nina is a co-owner of Sirens Call Publications, a co-founder of the horror writer's group 'Pen of the Damned', founder and administrator of the Ladies of Horror Picture-prompt Monthly Writing Challenge, and if that isn't enough, put a check mark in the box next to owner and resident nut-job of Dark Angel Photography.
View all posts by Nina D'Arcangela →
This entry was posted in Authors, Dark Fiction, flash fiction, FREE, Horror, Ladies of Horror, Writing Project and tagged author, fiction, flash fiction, Horror, Ladies of Horror, Naching T. Kassa, picture prompt, Writing Project. Bookmark the permalink.