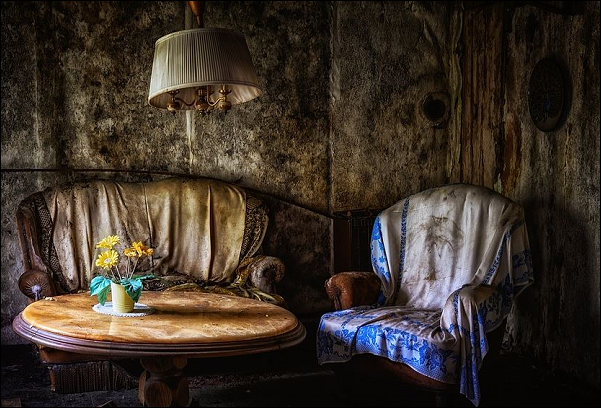 There were chairs in a parlor where
nobody sat, and dust collected in layers.
A table for card games that nobody won;
you could see the bare bones of the players,
whose shadows stained walls and a mantle of
grim descended from moonlight’s pall.
The Sitting Room had an old “died-in” smell,
which bothered no guests at all.
For here dwelt the spirits having no place to go —
the desolate-hearted, the under-trod,
with paths interrupted and shattered hopes,
the future gray, devoid of sod.
No mourners paid tribute, no tears would be lost
as they stood in the chamber uncounted,
awaiting a judgement that never tolls
for the souls who so little amounted.
Please spare them a thought or a prayer
if you will, these sorry invisible ghosts . . .
their griefs abundant and joys but few,
abiding in Limbo, stiff as posts.
Bring flowers to brighten the miserable hours
of those for whom no bell should ring.
Solemn and empty looked the seats
in a chamber of thrones unfit for a king.
Without the spade to carve the tomb,
a mortician’s touch on waxen brows,
their bodies collected bleak as crows,
unable to rest or rouse. 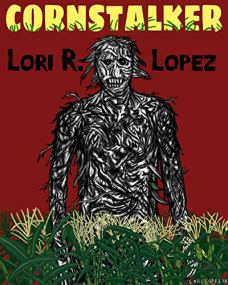 Trouble with a capital C! The tale begins when a car stops and a body is tossed into the Corn. But this is not just any crop. It is the battleground of a legendary creature who haunts fields along desolate highways, only when stalks are tall and the blood of brothers has been spilled in the soil — rising above the Corn like a burly Scarecrow.

A novelette of betrayal and retribution, “Cornstalker” pits a female truckdriver and a man with blood on his hands against a mythical beast summoned by a band of men wearing feathers and paint.

Jane is searching for her younger brother, who disappeared along a highway bordered by many ears. The last message on a sputtering cellphone had been something about a monster. So she took over his rig, coincidentally called “The Monster”, a heavy-duty black beast with a long snout, double chrome stacks and a reinforced grill. Anxiously prowling the roads of The Cornbelt, she picks up a stranger who could be dangerous. Our heroine may need to unleash her own demons to emerge from the Corn once she goes in.