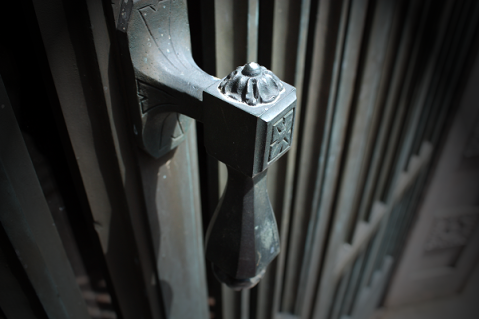 Never tell young people what not to do
without fully explaining the reasons why . . .
It compels them to wonder, speculate, obsess,
racked by suspense until they could die.
Imagination may be a terrifying thing
if allowed to go completely wild
and flow unchecked or grow like vines,
untamed as a forest in the head of a child.
I was ten when I rode the train to visit
my Great-Aunt Faye on a break from school.
She claimed I would love the manor and yard.
There was just one catch, a single rule:
“Keep away from the Family Crypt, my dear.
You must never go near or set foot within!”
The more she stressed, the more intense
did interest prickle beneath my skin.

An idyllic serene estate for a kid
such as I to quietly romp and roam,
who was seldom bored; who didn’t mind
being whisked so far away from home.
The kind who entertained herself,
needing little guidance or attention,
minimal fuss and maintenance;
who often provided her own invention.
Pacing the garden, sitting under an arbor,
visiting the Duck Pond or Aviary,
I concocted the craziest suspicions and fears,
ranging from morbid to truly scary.
If only I could peek and satisfy
my seething and burning curiosity
that burgeoned tall and jungle-thick,
rooted as deep as the highest tree.

At last I could bear this suspense no longer
and tiptoed with the furtivest treads —
afraid, aghast, abysmally alone —
approaching that bunker of doom and dreads.
One tiny look! Who would even know?
I justified breaking the only request . . .
In fact, I believed it to be a game,
a challenge to see if I passed her test.
Auntie Faye was terribly gray and proper.
She couldn’t keep an eye on me all day.
What would it hurt to stick my head in
for the quickest of glimpses then dart away?
As I came very close to the stony facade,
a timid adolescent paused to breathe,
but notions and mysteries crowded her brain
of the treasures and marvels old tombs bequeath!

Though I wasn’t that greedy or needy a girl,
it became an adventure to open the vault,
no matter how strident the warning still rang.
I was merely a child, not completely at fault.
To my sudden dismay I beheld a large bolt
securing the entrance snug and well.
Then realized with another jolt, its door
had been locked like a dungeon or cell.
The bodies trapped could not get out
yet I could get in, which made me smile.
I was eager to meet these occupants,
however gruesome the cause of exile.
Never once hesitating to think it over
and wonder why the outside was sealed;
reaching for the latch I heard a voice
address me by name. Both eyelids peeled.

“Unhinder the portal and liberate us.”
A rasping tone from a crackly throat.
“Confined for ages in cold and damp,
what spirit remains is gone to bloat.
Be kind now, strip that iron aside,
for it isn’t doing our bones any good!
This Charnel House of pent-up souls
permits less comfort than a box of wood.
Open up, sweet child, before I scream!
Charity. ’Tis what you are called.
You must grant it, at an elder’s behest.
Obey my request. Or be appalled . . .
We will haunt your every waking hour
till you wish you had, I guarantee.
And then your sleep shall the horde devour.
Unfetter this door, you miserable flea!”

By this time the impulse had all but faded.
I must confess I felt no desire
to grant these belated beyond-the-grave wishes,
and ignore a plea that echoed dire
to stay away from the burial chamber —
have nothing to do with what festered inside.
It wasn’t too much that a grownup might ask.
Now I yearned for somewhere safe to hide.
How I longed for a normal summer vacation,
at the seaside or woods, a nice hotel.
“I’m sorry, I can’t.” Four simple words
that resulted in a disturbing yell:
“YOU CAN’T OR YOU WON’T?”
The tomb fairly shook with an eerie rage
contradicting ghosts are flimsy like smoke.
I fled the venom, the bottled rampage . . .

And after that listened a lot better to my aunt
while keeping her company throughout the day.
Talking and laughing, exchanging a few secrets.
Walking, playing cards. She taught me Croquet.
I will never regret the moments we shared —
a collection of memories to store like gold —
as I guarded my distance from the grim mausoleum.
There is something of value in doing what you’re told.

Trouble with a capital C! The tale begins when a car stops and a body is tossed into the Corn. But this is not just any crop. It is the battleground of a legendary creature who haunts fields along desolate highways, only when stalks are tall and the blood of brothers has been spilled in the soil — rising above the Corn like a burly Scarecrow.

A novelette of betrayal and retribution, “Cornstalker” pits a female truckdriver and a man with blood on his hands against a mythical beast summoned by a band of men wearing feathers and paint.

Jane is searching for her younger brother, who disappeared along a highway bordered by many ears. The last message on a sputtering cellphone had been something about a monster. So she took over his rig, coincidentally called “The Monster”, a heavy-duty black beast with a long snout, double chrome stacks and a reinforced grill. Anxiously prowling the roads of The Cornbelt, she picks up a stranger who could be dangerous. Our heroine may need to unleash her own demons to emerge from the Corn once she goes in.