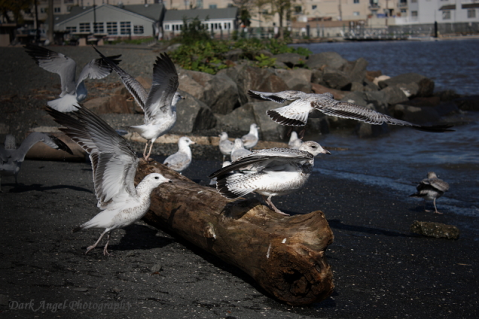 The Call
by A.F. Stewart

It began with a few, gathered on the beach, all squawks and flapping wings while the tourists laughed and tossed them crumbs. The birds moved closer, closer as more settled in the trees, long shadows cast to the beach. Human voices still chattered, among the caws, screeches and twittering, but the laughter stilled, replaced by a slight unease.

Some people rose to their feet, backing away, but others still tossed their crumbs to the ever-increasing number of birds. Flocks of them came, settling on the sand and in the trees, until only the voices of birds could be heard against the thumping scramble of feet fleeing towards the water.

The ocean splashed around frightened people as a great shrieking wave of avian feathers and flesh rose simultaneously and dove en masse. Screams ascended, and the smell of blood, as ripping beaks tore at eyeballs, ears, hair, and flailing arms. Sand and sea became awash in red, and, in time, the beach became littered with corpses.

Then, their screeching voices calling out, they rose to the sky on bloody wings and flew towards the city. 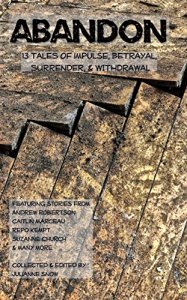 Nina D’Arcangela is a quirky horror writer who likes to spin soul rending snippets of despair. She reads anything from splatter matter to dark matter. She's an UrbEx adventurer who suffers from unquenchable wanderlust. She loves to photograph abandoned places, bits of decay and old graveyards. Nina is co-owner of Sirens Call Publications, co-founder of the horror writer's group 'Pen of the Damned', and if that isn't enough, put a check mark in the box next to owner and resident nut-job of Dark Angel Photography.
View all posts by Nina D'Arcangela →
This entry was posted in Authors, Dark Fiction, flash fiction, FREE, Horror, Ladies of Horror, Writing Project and tagged A.F. Stewart, author, fiction, flash fiction, Horror, Ladies of Horror, picture prompt, Writing Project. Bookmark the permalink.