I found it in an alley, propped against the side an overflowing dumpster. The tarnished silver frame hinted to its age, and I was surprised by its weight as I lifted the large canvas from the ground. A macabre Victorian house in tones of gray and black evoked feelings of lonely sadness.

I was drawn to the composition.

It hung on my living room wall for nearly a week before a change caught my eye. A pair of wooden shutters on the ground floor level were now open, as impossible as that sounds. Then a few days later, drawn curtains on the second floor. Doubting my sanity, I snapped a picture of the painting with my phone.

Another week passed before I had proof.

My heart raced in panicked shock as I gaped at the portrait.

Whipping out my phone I compared the images. Sure enough, the French doors to the attic balcony were now open in the painting. Shaking my head in disbelief I rushed out of my apartment, banging frantically on my neighbor’s door.

The door swung inward and Margo peered out with a look of concern. I grabbed her by the arm, dragging her to my apartment.

As I pointed with a shaky finger my breath caught in my throat, before I let out a terrified scream. There was now a woman standing on the balcony in the canvas. Her white nightgown stood out in stark contrast the dark house that she’d emerged from. She stared directly into my soul with her look of solemn melancholy.

Thrusting my phone in front of Margo’s face I showed her the proof. Her eyes grew wide and her face drained of color. Her voice was barely a whisper when she spoke. “Take another picture of it, now.”

I steadied my hands and made sure the image was in focus. With a click of my finger the flash popped and the image was captured. We gawked at my phone screen, taking note of the woman.

Looking back up at the painting I froze. She was no longer there.

Goosebumps raced down my spine, and as I turned to look at Margo I saw the ghostly woman – standing right behind us. 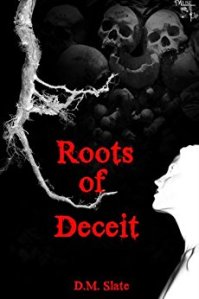 Fueled by the underlying currents of her daughter’s death, Gianna vows to unravel the mystery surrounding the foreboding apparition who keeps making appearances in her new home, but she’s not prepared for the grisly trail of clues that’ll unfold before her; testing not only her sanity, but her guilty conscience as well.

Zack and Gianna call on a team of paranormal investigators to start them in the right direction, and after the initial terror of the ghost’s presence begins to dull, Gianna finds herself sucked into a web of deception, lies and murder, as the ultimate questions are posed: who is the terrifying pale-faced ghost, and what does she want? As the secrets of the past reach their gnarled fingers out beyond the grave, grasping firmly onto Gianna’s soul, she starts to suspect her only neighbor, old farmer Peterson, of committing the unthinkable crime.

But finding evidence to prove a twenty-three year old murder is more difficult than Gianna anticipated, and when the ghost gets tired of waiting, she takes matters into her own hands; at which time the distinction between the two women begins to blur…

Nina D’Arcangela is a quirky horror writer who likes to spin soul rending snippets of despair. She reads anything from splatter matter to dark matter. She's an UrbEx adventurer who suffers from unquenchable wanderlust. She loves to photograph abandoned places, bits of decay and old grave yards. Nina is a co-owner of Sirens Call Publications, a co-founder of the horror writer's group 'Pen of the Damned', and if that isn't enough, put a check mark in the box next to owner and resident nut-job of Dark Angel Photography.
View all posts by Nina D'Arcangela →
This entry was posted in Authors, Dark Fiction, flash fiction, FREE, Horror, Ladies of Horror, Writing Project and tagged author, D.M. Slate, fiction, flash fiction, Horror, Ladies of Horror, picture prompt, Writing Project. Bookmark the permalink.