There once was a little boy that played in the sand
when suddenly a copper coin fell into his hand.
As its weight filled his small grasp,
there was a wish that he may ask,
and he thought of all the death that rocked this place,
a haunting image of his mother’s face.
He wished that evil never existed,
erasing all history once visited,
and the world fell to silence
for it never knew its violence.
And the land fell away,
only leaving the ocean to stay.
The little boy was now left all alone
with nowhere but a lighthouse to call his home. 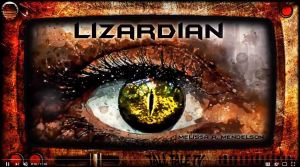 A federal agent and a local sheriff have a run in with a giant, humanoid lizard.