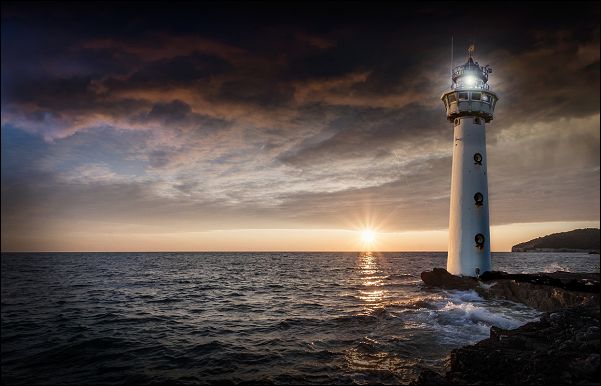 To See a Ship…
by Rie Sheridan Rose

Not surprising, but I keep hope.

I keep the light in service—shining its beam out into the endless sea. The sun rises; the sun sets; the world turns round. But nothing breaks the plane of the horizon. A thousand, thousand hours…more than a century…I’ve climbed these stairs to stare out to sea. Nothing ever changes but the color of the water as the sun rises and falls.

This lighthouse was an outpost originally. A bastion in the forward fight. A hundred ships a day steaming past the point. It set the heart a-thundering.

But day by day the numbers dwindled…fewer ships returned to port each time they docked. The sky blazed with streaks of light—never dark enough to see the stars at the height of things. They were fighting far enough away that I couldn’t hear the booms, but I could see those streaks of light—and the ships no longer returning.

I was the only keeper at this lighthouse. No family. No friends. No one to notice if I lived or died. No one to remember to say “Stand down.” No one at all.

So, I keep the light in service. I catch the glowing fish beneath the sea for food…I catch the rain that falls for drink. I glow a little myself at night…it amuses me.

But I have not seen a ship for years and years. Each day I climb the stairs…I stare out to sea. It’s all I live for now…my hope one day…

…to once more see a ship.