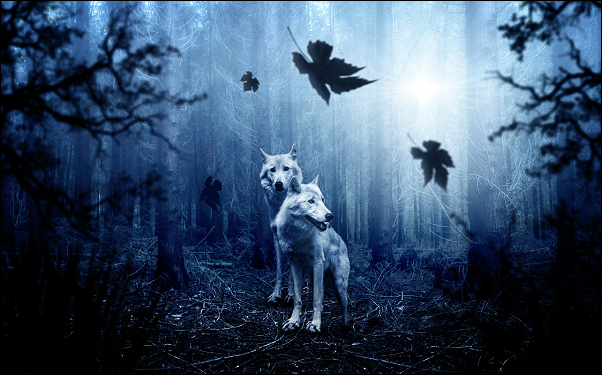 Mitch and Sarah
by Kathleen McCluskey

The time of Samhain approached. The oaks were delivering an epic show of vivid colors that blanketed the earth with a brown and crimson bed of discarded leaves. Sarah knew that the time was almost upon her and Mitch to complete their bond as husband and wife. Her preparations added to the already gorgeous surroundings. She hung lanterns in the branches of the mighty oaks. She made a clearing in the soil where they would exchange their vows. The officiant would be Mother Nature in all her glory. The wildlife of the forest embraced Sarah and Mitch as one of their own. They had spent their lives protecting the fragile environment of the Pacific Northwest.

The poachers watched as Mitch and Sarah began to recite their love for one another. They had just finished raiding a wolf pack. The pack was unaware of the interlopers as the food that they all had eaten was laced with sedatives. They slept peacefully under the autumn sun as the poacher sliced their throats. They now carried their skins in bags. Mitch and Sarah’s happy nuptials were in their path. They waited in silence and watched, disgusted by the display of love of nature and each other. Sarah stepped out of the circle she had cleared to finish the bonding as husband and wife. She wanted to exchange wild flowers with Mitch as a symbol of her everlasting love. She could see eyes peering out from between the branches of the foliage. She began to scream as the rifle was leveled at her head. Mitch heard his beloved and ran to her. Another rifle was leveled at him. The wounds they sustained were not instantly fatal, they crawled to each other. Inside the circle they died in each other’s arms. The last thing they both saw was each other’s eyes as the life drained from them. The poachers hooted and hollered as they stepped over the dead couple. One callously kicked at Sarah’s head causing her to roll over. Her dead eyes met his. Startled that her eyes were opened, he dropped his bag of wolf carcasses onto the lover’s blood.

The bag began to pulse and twitch. The other poachers began to run. This lawbreaker’s feet were glued to the ground as he watched the bag lift into the air. A loud howl was emitted from the bag, it began to vibrate and spin. It spun around like a child’s top. Falling out from the bloody bag was a wolf. A large timber wolf, it put its head back and howled. Another large timber wolf fell out of the bag. The alpha male and alpha female were reborn as Mitch and Sarah’s bodies vanished. They snarled at the poacher. The male wolf circled behind the poacher as the female wolf watched his every move. The male pounced onto the man’s back and ripped his head off of his shoulders. The female wolf howled again and went to her love. They rubbed on each other and knew that the other poachers must pay for their corrupt behavior. They both vanished into the woods to complete their revenge. 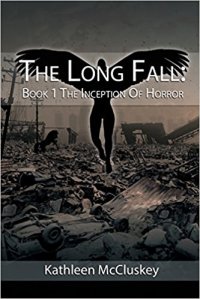 Nina D’Arcangela is a quirky horror writer who likes to spin soul rending snippets of despair. She reads anything from splatter matter to dark matter. She's an UrbEx adventurer who suffers from unquenchable wanderlust. She loves to photograph abandoned places, bits of decay and old grave yards. Nina is a co-owner of Sirens Call Publications, a co-founder of the horror writer's group 'Pen of the Damned', and if that isn't enough, put a check mark in the box next to owner and resident nut-job of Dark Angel Photography.
View all posts by Nina D'Arcangela →
This entry was posted in Authors, Dark Fiction, flash fiction, FREE, Horror, Ladies of Horror, Writing Project and tagged author, fiction, flash fiction, Horror, Kathleen McClusky, Ladies of Horror, picture prompt, Writing Project. Bookmark the permalink.