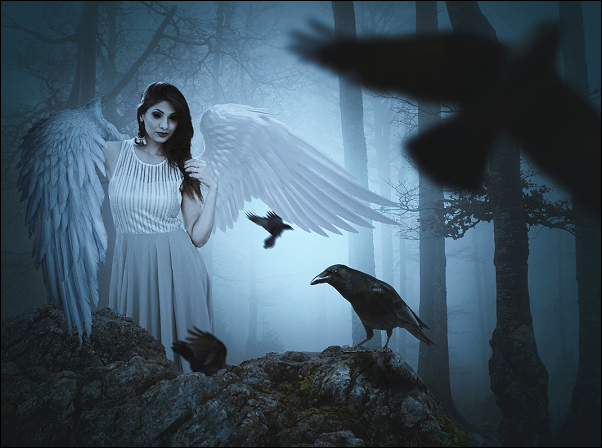 An Unkindness of Ravens
by Stacey Turner

The dream was always the same: Elin stood in the dusky, moonlit forest, clothed in a white flowing gown. Heavy, feathered wings sprouted from her shoulder blades, though she was unsure how they worked. As she pondered both her surroundings and herself, large, black ravens began to appear, alighting on nearby branches. Swooping low from behind, to perch on the limbs of adjacent trees, they formed a circle around her. Once surrounded, the cacophony of their caws sounded more and more like speech and less like the cries of simple birds. They stared accusingly with cold, hard, black eyes, unflinching in their directness. She knew she had nothing to be ashamed of, nothing to hide, but still she fought not to shrink from their combined gaze. What could they possibly want from her?

As one, the birds lifted from their perches, whirling, dervish like, into the night sky, coalescing into a great, fluid line. They flew straight up, looped, then dived, buzzing Elin so she dropped to the ground in sudden fright. Recovering, she rose and followed them, pulled by some vague intuition she could feel deep in her belly, but couldn’t have named. Still unsure how to use the wings, she walked through the woods gracelessly, longing to soar as the ravens were. They halted in the middle of a darker part of the forest, lighting on the tree branches in a circle again. Elin stumbled into the center, noticing a single raven also stood on the ground. It hopped over to a tree and paused between the roots. It pecked rapidly at the ground while she looked on, confused. The others cawed from the trees, the noise deafening. She lifted her hands to her ears, but as she covered them, she realized they were actually pronouncing the same word over and over: “help.”

Without stopping to wonder at the birds’ communication skills, she dug frantically where the raven indicated. The first bone lie only a few inches beneath the surface. Horrified, yet oddly calm, she stopped and sat back on her heels. “”Help,” the raven beside her said again.

“Yes,” Elin answered. “I will get help.” Ripping a strip from the hem of her gown, she tied it around the tree so she’d be able to find the spot again with the police. “I’ll be back,” she promised the ravens and turned to go.

Shrill ringing stung her ears and she reached out instinctively with her left hand to silence the noise. She opened her eyes to her sunlit bedroom, the dark forest far behind, along with the ravens, the angel wings, and the bones. Rubbing her face, she sighed. God, the dreams were so intense. Her shoulders even ached, and her shoulder blades itched where the wings had been. Scratching absentmindedly, she threw back the covers and flung her legs over the side of the bed. She clamped a hand over her mouth to stifle her startled gasp. Lying on the sheet were two feathers: one jet black, the other pure white. 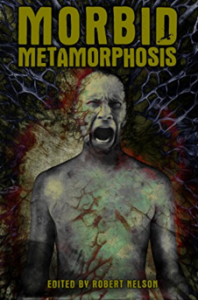 Nina D’Arcangela is a quirky horror writer who likes to spin soul rending snippets of despair. She reads anything from splatter matter to dark matter. She's an UrbEx adventurer who suffers from unquenchable wanderlust. She loves to photograph abandoned places, bits of decay and old grave yards. Nina is a co-owner of Sirens Call Publications, a co-founder of the horror writer's group 'Pen of the Damned', founder and administrator of the Ladies of Horror Picture-prompt Monthly Writing Challenge, and if that isn't enough, put a check mark in the box next to owner and resident nut-job of Dark Angel Photography.
View all posts by Nina D'Arcangela →
This entry was posted in Authors, Dark Fiction, flash fiction, FREE, Horror, Ladies of Horror, Writing Project and tagged author, fiction, flash fiction, Horror, Ladies of Horror, picture prompt, Stacey Turner, Writing Project. Bookmark the permalink.