Fear No More
by Bailey Hunter

I remember it all – the night air, thick and heavy with the scent of fresh rain and old vomit. The thronging bass beat pounding through the metal door I’d just used to escape sweaty bodies crashing against me in waves. The ache in my head as I tried to gulp down the anxiety building like a crescendo with each beat of that wretched bass… and her.

To say she looked like a Goddess would be too weak. She was fire, and water. She stood in that dank alleyway glowing as if she were metal being forged… and her eyes. Oh god, those eyes.

She didn’t speak. She didn’t have to. Her eyes said everything that mere sounds could never convey.

I loved her in that second. More than I’ve loved anything or anyone. It was the love of a mother, and a pet, the love of friends, and coffee. It was desire, and hunger, and need. It was all of this. It was so much more. Every love I had ever felt or dreamed of feeling all mingled and swirling as she stared at me – through me.

I remember the rapture of her eyes. The sensations of my soul slipping away, my very essence being drawn out of me cell by cell, neuron by neuron into her gaze. It was pure. It was bliss. Each second locked there was a peace I’d never known, and I remember praying it would never end.

I have seen that look many times since that night. I see it now from the other side.

We are on the hunt again. We find her clinging to a wall, and feel her stomach twisted in knots. We see her soft sad eyes that peer at us in wonder. We will claim her, bring her into us, and give her a love she could not believe existed.

She will become We, and fear no more. 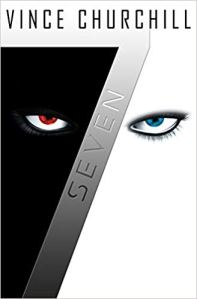 God… The Devil… Forever engaged in a struggle for influence over the hearts of humanity. Now, the war between Good and Evil will be decided by seven diabolical contests, with ordinary people from a small Midwestern town serving as the combatants. The very existence of Heaven or Hell lies in the balance.