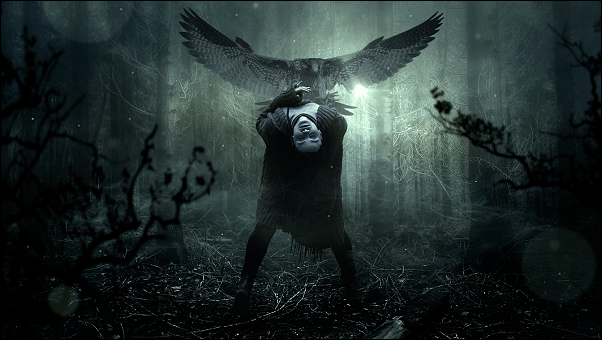 At first, I was afraid of the woods’ darkness, the chittering of creatures seen and unseen, the damp, cloying scent of decay, the acrid taste of death . . . And yet, I returned to the woods again and again, as there was something here that called to me, to me alone, and I longed to see its face, to know who—or what— it was.

Late one afternoon, just before night descended and the moon rose full, I heard the flapping of wings, the crackle of branches as an immense bird with obsidian feathers descended to a thick branch, clinging to it with razored talons. It studied me, turning its head this way and that, eyes overflowing with eerie light—and something else. Intelligence? Curiosity? Hunger?

It was well after dark when the bird finally took to the sky, circling over my head several times as if to cast a spell that would hold me in thrall. My chest heaved, expelling air, drawing it in, until I was finally able to steady the racing of my heart.

And then I ran. Oh how I ran until my house came into view. The lights were still on and my parents were more worried than angry that I’d been out so late.

“I was in the woods and lost my way,” I told them, leaving out the part about the strange black bird.

“What have we said about going into the woods so close to dark?” my father said with measured voice, hands crossed over his chest.

“Let’s see that you don’t,” Mother added with a stern face before pressing her forehead against mine, pulling me in for a long embrace.

That night, I dreamt of a boy, a man, really, with black wavy hair cascading down his back, with eyes that fixed onto mine with an intensity that made me shudder awake.

In the morning, there was an obsidian feather on my pillow.

Even though I closed and locked the windows, he returned to my dreams for nights on end, leaving another feather as the day followed. A gift? An invitation?

Even as my dreams became more vivid, more lucid, I would rarely remember them upon awakening. They were just dreams, weren’t they? The feathers placed there to protect me in dreamtime by Mother or perhaps Father. I had always known there were secrets in our home, my parents often whispering in a tongue that I had never spoken, never learned. Were they practicing the old ways?

As the next full moon began to rise, I approached the forest’s edge, the feathers bound together in a red cord tied around my neck. There was a slight echo to my footsteps as I made my way deeper into the forest, and I sensed that I was being followed, could almost feel their breath against the back of my neck. When I whirled around, all I could see were shadows cast by tree limbs and branches, so I continued on.

When I reached the glade where I’d first seen the strange black bird, there was a man straddling one of the lower branches. He leapt off with ease, landing on his feet before me. I backed away and he laughed. “Try as you might, you cannot escape your true nature.” 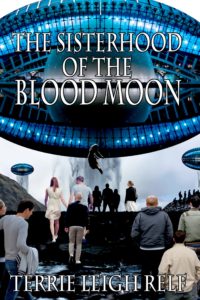