The Vengeance of She
by Joslyn Corvis

Love came as easily to her as murder. Running solely on sensuality and emotion, She had no discernment between right and wrong. Light touches of silk sheets. The first sip of morning coffee. Sex with love. The pain of betrayal. As a demon inhabiting the fleshly form, it was all the same to her.

She had found her Him. Six months in, one of her simplest joys were late Saturday nights of heated passion leading to leisurely Sundays in bed. It was the only time they had together. Work, he explained. The building anticipation during the week made the wait worthwhile and She dreamt of the day they would spend every night together.

It was a typical Sunday. Nibbles of sweet-talk. Fingers entwined. His phone interrupted, he grabbed it, kissed her forehead, and excused himself. She stretched and basked in bliss when She heard the low bass of his voice reverberating from the bathroom down the hall. With the agility of a cat and her pupils dilating into slits of curiosity, She coquettishly made her way down the hall. Although a demon, She was every bit a lady.

Emotion and fury took over as her ear picked up her Him arguing with someone. “Honey, calm down…We’ll talk when I get home…I’m still at the hotel, I’ll see if my boss can send me home early…”

Her body was wracked with a silent cry as She braced herself against the bathroom door. The underlying hues in her brown eyes turned red and her face morphed into something horrific, She’s true form. Squinting through tears, her eyes fixated on the only exit to the apartment, sparking an instant fire. She left her flesh behind, saving herself from the burn. The body She knew was left confused as it slowly died. And She watched her Him suffer until his life was snuffed out completely.

Love. Heartache. Death. To She, it was all the same. 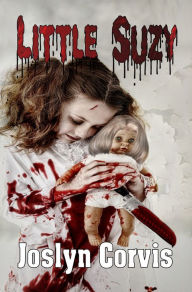 Suzy silently suffers abuse and neglect with her co-dependent Mommy, but Suzy’s smile never fades through it all. When she realizes that she has no future if she continues to accept life as she knows it, she decides to take a drastic step to escape her life of torment as the lines between strange fantasy and twisted reality blurs.

Nina D’Arcangela is a quirky horror writer who likes to spin soul rending snippets of despair. She reads anything from splatter matter to dark matter. She's an UrbEx adventurer who suffers from unquenchable wanderlust. She loves to photograph abandoned places, bits of decay and old grave yards. Nina is a co-owner of Sirens Call Publications, a co-founder of the horror writer's group 'Pen of the Damned', founder and administrator of the Ladies of Horror Picture-prompt Monthly Writing Challenge, and if that isn't enough, put a check mark in the box next to owner and resident nut-job of Dark Angel Photography.
View all posts by Nina D'Arcangela →
This entry was posted in Authors, Dark Fiction, flash fiction, FREE, Horror, Ladies of Horror, Writing Project and tagged author, fiction, flash fiction, Horror, Joslyn Corvis, Ladies of Horror, picture prompt, Writing Project. Bookmark the permalink.