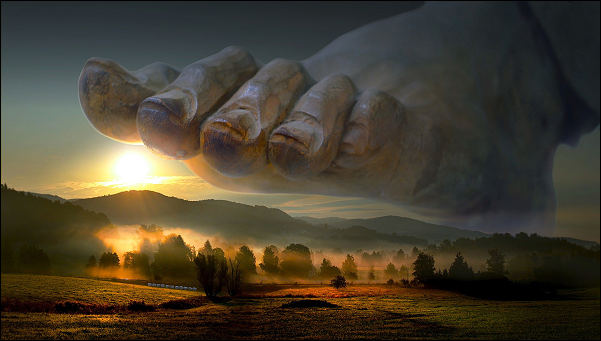 A shining spirit had Lisette Sparkle.
Everyone saw it. She glowed in the dark
Causing all around her to somehow feel better
When she was near. Then she wasn’t.
After a night when the Moon disappeared;
On a day when solid earth would tremble,
A shadow spilled across the vale,
Thicker than a murken tar stirred by a beldam
In a great mixing bowl . . . out of nowhere.
The shuddered land warned of
Certain calamity. Undeniable sorrow.
Quakes rippled, spreading shockwaves
Through a village of complacent stodgy bodgers
Who didn’t believe in fairytales,
And couldn’t imagine a legend coming true
Until it did. A massive object crashed
Upon a lone shack — left flat as a griddlecake.
Ruined at the base of a crater-like footprint.
Lisette was gone, and the community
Brightened by her cheer now shivered
From a bottomless chill.

Unbeknownst to them, tracks scarred
The region, blemished hills and countryside,
A pitted trail of gaping indents.
The mourners only knew a single horrific
Impression had been made, a large one
That snuffed out the light of a precious heart.
Grieving with bouquets and tears,
They carried the girl’s remains by procession
To a line of gravestones, which marked the sacred
Resting places of previous victims, each slain by
A similar fate: smote by the steps of a Bigling.
Yet none had lived in those times, and none
Believed the quaint lore handed down
Or tacit evidence of shallow ponds, faint cavities.
They simply honored a custom and
Dug a pit, lowered a box beside the row.
Alas, when people stop believing facts
And start ignoring history, dismissing truth
As children’s fables, they risk being blind to
Reality . . . falling prey to the same woes, the same
Menaces and mistakes. Soon as she was buried,
Her inspiration fled their minds. They shuffled home,
Resumed endeavors filled with common routines,
Colorless as a meadow devoid of flowers and song.
Gaining no virtue or purpose, gleaning no
Wisdom out of tragedy. A vital essence
Missing they couldn’t define.

Actually, a couple of things — including
The resplendent beacon that failed to appear.
Its familiar visage, frowning or shy, pale as wax,
Neglected to banish the gloom, making their hours
Very dismal indeed. Fools above ground,
Hailed as survivors, forget that calamities may
Repeat, and they aren’t safe just because a thing has
Already occurred. But it wasn’t the end of
Lisette Sparkle. The lucid spirit
Detached from her body, thin as a Tarot Card.
Features gleamed in the gloaming.
A deadwoman’s grin transcended skin as she drifted
From the grave, a beautiful yet creepy apparition.
Her mission to warn the town that
Tragedy loomed, a dire weight of doom,
If they did not heed lessons of old,
And could drop like a boulder out of the heavens.
These toe-gazing doubters and drudges were
Too busy to listen. They refused to accept clear signs
That ghosts exist and the danger was no myth or
Yarn. “You must leave till it is safe!
Till this bane is past!” Lisette couldn’t capture
Their attention, convince friends and neighbors she
Was not an illusion. The specter faded back
To her tomb, her casket, a candle extinguished.
Blown out by disappointment.

One moonless eve on a Monday
The dreadful, the impossible returned to
Haunt them. A cumbrous misery, a bleak misfortune.
A terrible stride as the giant’s other foot
Smashed in their midst —
Breaking, sundering rows of shoppes and houses.
An odious tyrant glared at survivors and spoke
With the rumble of thunder, in words harsher than
Curses: “You Littlelings are incredibly dull.
I grow weary of witnessing the monotony,
The mundane mellow-drama. ’Tis punishment
To stare at you from afar, yet I have nothing
Better to do! Wide awake, less interested than
A cat studying a bug crawl out of reach.
And I lack the patience of a puss, so here I be.”
The rank enormity guffawed. “A rude lummox.
A feller without any manners according to
The lady upstairs. My mother.”
The Man In The Moon bent to confide, a loud
Whisper: “Now’n’then I hop down to
Squash several of you dots and dolts like insects!”
Brutish he towered, rendering a dark night
Darker still as a group of tiny folk
Huddled afraid, unable to outrun him or hide.
At the mercy of an ogre who had none.
“Farewell, idjits. I’ll be seeing you. Wait, I think
I’ll stomp a few more fer fun!” The cretin
Lifted a bare foot in a threatening pose.

“Do not take that step, else it be your last!”
A shape had formed. A vibrant sheen.
An ethereal presence, unable to sleep or move beyond;
Her town in peril, facing a tide of anguish.
The remaining villagers wept, gasped, rejoiced.
Beaming with gladness, they recognized their
Champion, the sweet guardian angel . . .
Lisette confronted a pugnacious galoot.
“You will not harm another head!
Go back where you came from! Where you belong!”
Her voice rang high, tolling to a lofty ear.
The lunar lunk roared, a prolonged bellow of
Vanity and furious bile, then hastened to grind her
Underheel. Neither flesh and bone nor heart of rock
Could crush a soul. The foot rose again.
Discovering his challenger intact,
A monstrous Moonbeast snarled, red as Mars from
Offended masculine pride at a puny lass
Who dared defy him. “Or what?” he growled.
“What can you do to me? You, a meager wisp.
A whiff of air. A whinge of vexing
Troublesome vapor!”

The petite maiden folded her arms.
“I can tell your mother!” scorned she,
Words that taunted and daunted a savage breast,
Reducing man to mere boy —
Still to his core a mom-fearing son.
“There’s no need. I’m going!” A petulant sigh.
The rampager took one flying frantic
Giant leap up toward the sky.
An eternal maternal unseen orb demanded
“Where have you been?”
Even the Mother In The Moon could lose track
Of her charge. A cruel lad who steps on
Living creatures, he curled in a ball embraced by
Unconditional forgiveness, while she vowed
To keep a closer eye, not let him stray from
Sight and cause pure havoc, for she knew him well.
Or abandon his post, the chore of watching over
A drowsy world. It all goes to show that
Stories, like people, can confuse their morals . . .
And one might be prudent on the darkest of nights
To beware the mercurial phases, rankled
Temper, idle wrath, curdled boredom and
Condescending nature of the Moon’s
Wild, wicked, wayward child. 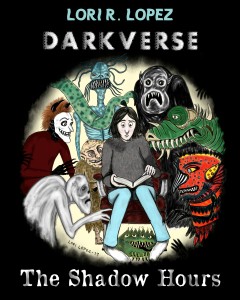 A rich gathering of poetry with a dismal twilight atmosphere, a brooding nature, an eerie tone . . .  DARKVERSE:  THE SHADOW HOURS encompasses such pieces written by Lori R. Lopez between 2009 and 2017, collected in three of her Poetic Reflections volumes along with humorous and serious verse.  This ample compendium allows a more focused reading experience and mood — presenting poems that share speculative themes, flashes of horror, glimpses of madness.

Lori is the author of THE DARK MISTER SNARK, LEERY LANE, MONSTROSITIES, AN ILL WIND BLOWS, THE FAIRY FLY, CHOCOLATE-COVERED EYES, JAR BABY, SAMHAIN, 3-Z, and SPIDER SOUP, among other tales.  She has been called a storyteller, whether composing verse or prose.

The aim of her DARKVERSE series is to offer a chilling trek through unlit stretches where all manner of creeps and kooks may lurk; where graveyards and bogs and full-moons abound.  The pages of THE SHADOW HOURS illuminate those morbid uncanny perils and dreads that inhabit drab corners, the known and unknown terrors of the night.  Vivid and distinct, her voice echoes our worst fears then delves beyond, exposing hitherto unimaginable frights.

Look for an Illustrated Print Edition with quirky art by the author.

Nina D’Arcangela is a quirky horror writer who likes to spin soul rending snippets of despair. She reads anything from splatter matter to dark matter. She's an UrbEx adventurer who suffers from unquenchable wanderlust. She loves to photograph abandoned places, bits of decay and old grave yards. Nina is a co-owner of Sirens Call Publications, a co-founder of the horror writer's group 'Pen of the Damned', founder and administrator of the Ladies of Horror Picture-prompt Monthly Writing Challenge, and if that isn't enough, put a check mark in the box next to owner and resident nut-job of Dark Angel Photography.
View all posts by Nina D'Arcangela →
This entry was posted in Authors, Dark Fiction, flash fiction, FREE, Horror, Ladies of Horror, Poetry, Writing Project and tagged author, fiction, flash fiction, Horror, Ladies of Horror, Lori R. Lopez, picture prompt, poem, poet, Writing Project. Bookmark the permalink.