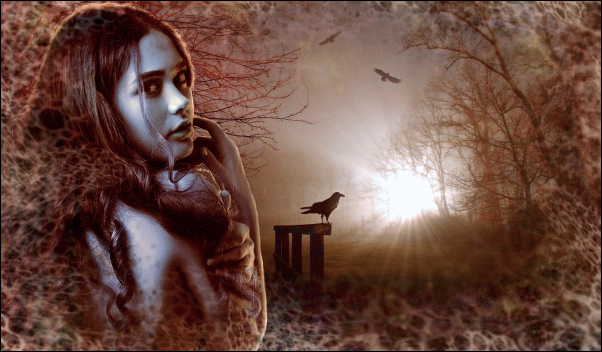 A Look Into the Eyes
by Kim Richards

A second after the severed head hit the bottom of the basket beneath the guillotine with a thud, shouts rang up from the crowd.

“Look into the eyes!”

Some of the peasants drew back, hesitant with fear…of knowing. Others drew near, wanting only to watch. An old woman leaned forward and spat on the ground before hobbling away.

Yarich was not afraid or content to simply view the spectacle. He saw enough of them these past few years. He wanted to see; to know. He shouldered his way past two young men daring one another to pick up the head.

“Then you go first…unless you have pissed yourself already.”

As Yarich stood over the basket, staring at the bloody, grimy thing, the crowd calmed and grew quiet. He knelt, reached down, took it by the ears, and lifted it to his eye level. One of the head’s blue eyes blinked. He decided it was the one to peer into.

He leaned closer and realized the lips moved, forming soundless words. He didn’t hesitate to figure out what the dead man said because he knew there were only moments before the eyes closed for good. It is the eyes which are the proverbial ‘windows to the soul’. Thus he looked deep into the wide open blue eye, focusing on the iris.

The pupil instantly transformed into a bright light like the morning sun shining through the forest trees. In fact, a forest came into focus on the edges of the periphery. A grass clearing appeared just beneath the light. In the center of the clearing stood an ancient henge of four stone pillars, topped with a long stone bar. Perched atop the henge a white raven kept watch. It’s head moved from the side to side the way birds often do. Two more flew in the sky, tilting left and right as they soared towards the light.

Yarich gasped as a beautiful young woman stepped into view. Her ivory skin was uncovered except for where her long, red tresses curled to cover her shoulders and part of her back. She paused as if realizing he were there and looked back over her shoulder. Her eyes flashed silver and then red for just a second.

Then the head’s eye closed for good.

Stunned, Yurich gently placed the head back inside the basket. He walked away, not hearing the myriad of questions from the people around him. He knew she saw him and now he was cursed.

Nina D’Arcangela is a quirky horror writer who likes to spin soul rending snippets of despair. She reads anything from splatter matter to dark matter. She's an UrbEx adventurer who suffers from unquenchable wanderlust. She loves to photograph abandoned places, bits of decay and old grave yards. Nina is a co-owner of Sirens Call Publications, a co-founder of the horror writer's group 'Pen of the Damned', and if that isn't enough, put a check mark in the box next to owner and resident nut-job of Dark Angel Photography.
View all posts by Nina D'Arcangela →
This entry was posted in Authors, Dark Fiction, flash fiction, FREE, Horror, Ladies of Horror, Writing Project and tagged author, fiction, flash fiction, Horror, Kim Richards, Ladies of Horror, picture prompt, Writing Project. Bookmark the permalink.