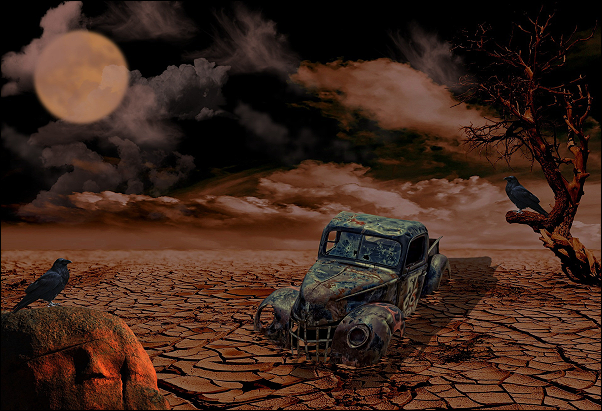 As I was walking all alone,
I heard two crows (or ravens) making a moan;
One said to the other,
“Where shall we go and dine today?”
“In behind that old turf wall,
I sense there lies a newly slain knight;
And nobody knows that he lies there,
But his hawk, his hound and his lady fair.”
“His hound is to the hunting gone,
His hawk to fetch the wild-fowl home,
His lady’s has taken another mate,
So we may make our dinner sweet.”
“You will sit on his white neck-bone,
And I’ll peck out his pretty blue eyes;
With one lock of his golden hair
We’ll thatch our nest when it grows bare.”
“Many a one for him is moaning,
But nobody will know where he is gone;
Over his white bones, when they are bare,
The wind will blow for evermore.”

In an iron-grey sky, two crows circle above the parched, cracked earth, scanning the ground in the never-ending search for food. The sun beats down on their wings, glinting blue-black.

One bird spies a long-abandoned pickup truck baking in the heat. The bird knows stranded trucks often conceal secrets, stashes of forgotten snacks, or, sometimes, the body of a luckless two-legger. The black bird tips a wing and spirals downward. The second crow follows and settles on a tree limb above the dead truck.

First lands on the side of the truck bed. He cocks his head and inspects the empty bed. Nothing to eat there. He edge-foots toward the cab, hops onto the open window ledge. The faint smell of old death fills the air. First caws, calling his friend. A feast lies within, long dead and desiccated but edible.

Second flutters to the roof of the pickup. His nails click on the rusted metal as he struts across the top of the vehicle. Bending deeply, he peers inside, his head upside down. He smells the meat and flips himself onto the dusty truck seat.

A pair of two-leggers sprawl, their bodies spilling onto the floorboards. Second spreads his wings a bit and glides to one body. He walks up toward the head, gripping the skin, made leathery by the heat. He clacks his bill a few times, the sound sharp in the silence.

First hops onto the unmoving steering wheel and from there to the skull of the male two-legger. The black bird prods the dead face and peels off a strip of jerky-like flesh. It tastes good, but then the birds have been searching for food for a couple of days. Almost anything would taste good. He tries for a favourite bit, the eyes, but they have withered and collapsed. Grasping the skull fiercely, First jabs deeply into one eye socket. The tip of his bill breaks through the layer of bone and into what’s left of the brain.

An image bursts inside First’s mind, connected somehow by that desiccated bit of brain matter. This connection happened sometimes but seldom as ferociously as now. His beak gapes wide, a withered bit of brain matter dangling from it, and he spreads his wings, mantling over the body of the two-legger, black eyes rolling up into his head in an unnatural way.  An equally unnatural hiss escapes his gaping mouth.

In another dimension – or in the disembodied memory of the two-legger – First sees the two-leggers driving this dilapidated truck away from the city, hears the male yelling about “betrayal – you even took my dog!” Sees the male shoot the female with a bang-stick like they used to shoot crows. Sees the male hold the female’s body in one arm, sobbing, while he shoots himself as well.

First shakes himself, caws loudly, and begins to seek an edible bit of flesh. The two-leggers wrecked this world, destroyed themselves on a grand scale. These two would keep him and Second alive a little longer. Maybe till the rains came and with them, food. 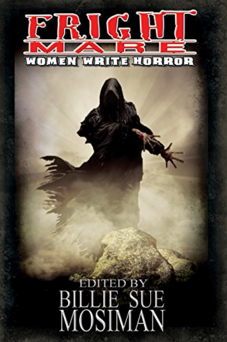 Nina D’Arcangela is a quirky horror writer who likes to spin soul rending snippets of despair. She reads anything from splatter matter to dark matter. She's an UrbEx adventurer who suffers from unquenchable wanderlust. She loves to photograph abandoned places, bits of decay and old grave yards. Nina is a co-owner of Sirens Call Publications, a co-founder of the horror writer's group 'Pen of the Damned', founder and administrator of the Ladies of Horror Picture-prompt Monthly Writing Challenge, and if that isn't enough, put a check mark in the box next to owner and resident nut-job of Dark Angel Photography.
View all posts by Nina D'Arcangela →
This entry was posted in Authors, Dark Fiction, flash fiction, FREE, Horror, Ladies of Horror, Writing Project and tagged author, fiction, flash fiction, Horror, Ladies of Horror, Mary Ann Peden-Coviello, picture prompt, Writing Project. Bookmark the permalink.